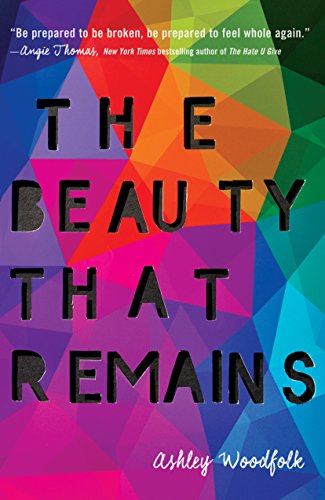 The Beauty that Remain tells the story of three teens who have recently lost a peer. The chapters alternate among the three, sharing their memories of the loved one, and what they are doing to stay engaged with life without the one the lost. It was a little dark to begin with, but it told a great story of healing, and one of my favorite parts of the novel was seeing the personal growth and healing of each of the three, accomplished in different ways — counseling, open communication with family members, engagement with friends etc. Another thing that interested me was trying to figure out the connection between the characters. They were the same age, and lived in the same area, but were each mourning the loss of a separate person.

Logan’s loss is his ex, Bram, dead by suicide, though no one really knows why. He was a happy, popular outgoing guy. When Bram broke up with Logan, Logan told him he hoped he died alone. Those words have haunted him. Even though he hadn’t talked to him in 6 months, he’s figured out that there’s a difference between choosing not to talk to someone and not ever being able to talk to them again.

Shay’s twin sister Sasha died of Leukemia. They were sisters, best friends, and collaborators on a website that covered the teen band scene. Their group of friends feels different now without her, and doing work on the website definitely feels wrong. Her friends are mad, her mom is mad because she’s slipping in school and staying out too late, but Shay just can’t figure out what to do to make her world feel right.

Autumn lost her best friend Tavia in a car accident. She is spending all of her time at Tavia’s house with her family, in her old room, with her brother Dante. She can’t drive by the location, so it takes her an hour to get home from school. She texts and emails Tavia several times a day, even though she will never be able to hear from her again.

Ashley Woodfolk is a young woman of color who wrote a lovely novel about young men and women of all colors and background and families. Reading as an adult — a parent of a young teen — I’m all about kids of all colors and backgrounds reading about others. That said, this novel does have a lot of adult behavior, including heavy alcohol use, drug use, and hook ups. The characters in this novel are around 16, and I wouldn’t put it in the hands of anyone younger than that.

« The Lucky Ones
The Boo-Boos That Changed The World »