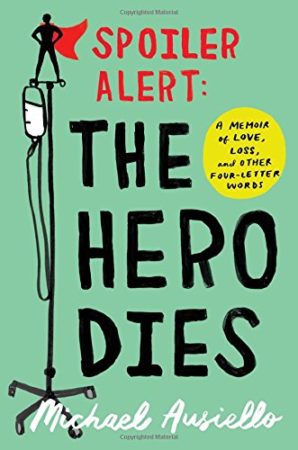 TV fans who are active on social media may recognize the name Michael Ausiello. Formerly a writer for TV Guide and Entertainment Weekly, Ausiello is known for his spoiler heavy Ask Ausiello column, and co-launched the TV website TV Line. He also happens to be the brother-in-law of my good friend and sorority sister, which makes his story personal for me.

In 2014, Michael’s longtime partner, Kit Cowan, was diagnosed with a rare and aggressive form of neuroendocrine cancer. Spoiler Alert: The Hero Dies: A Memoir of Love, Loss, and Other Four-Letter Words is Michael’s memoir of that time, from Kit’s diagnosis, through treatment, and his (spoiler!) death 11 months after diagnosis.

Interspersed with their dealing with the cancer are anecdotes of how the two men met, the ups and downs of their relationship, and how Michael’s insecurities and enormous Smurf collection almost chased Kit away. Full of snark, honesty, and raw emotion, Spoiler Alert is funny, heartbreaking, and requires a box of tissues handy.

Notes on the audiobook: Spoiler Alert is read by the author himself, and hearing him tell his story makes it even more poignant and heartbreaking. I can still hear his voice as he tells his story – his incredulity that Kit picked him, his unbearable sadness when he lost the love of his life.

« The Chalk Man
The Women in the Castle »