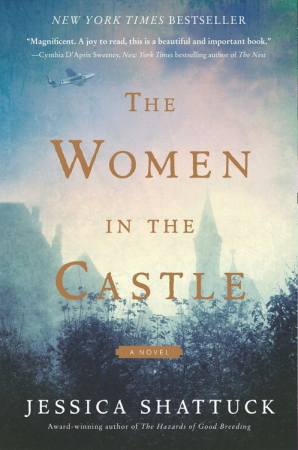 When you’re a book reviewer, it’s not unusual to hear a lot about a certain book. A lot of the time, you eagerly request, receive, and read the book, only to be disappointed. But once in while, the book more than lives up to the hype! The Women in the Castle is one such book. It’s so good.

Set primarily in Germany in the years immediately following WWII, the novel follows 3 German widows, all staying with their children in the ruins of a castle belonging to one of them, Marianne von Lingenfels. She and her husband, Albrecht, were friends with Constance Fledermann, and could not understand his falling for the lovely but uneducated Benita, a poor girl from an even poorer town. But after Albrecht and Connie are caught in the failed attempt to assassinate Hitler, and are ignominiously executed, Marianne and her 3 children make their slow painful way back to the castle. Then she sets about gathering to her the widows of the other members of the plot or resistance fighters. She finds Benita in a Russian brothel and rescues her son, Martin, from an orphanage where his father’s aristocratic blood got him a place. She finds Ania and her 2 sons in a camp for Displaced Persons, and even though she didn’t know Ania or her husband, she and Ania together form a bond of friendship, both of them reliable people.

Marianne is in many ways a formidable woman–tireless, idealistic, principled. But nothing in her privileged upbringing prepared her for post-war life, with returning Nazis and starving Russians tramping though on their way home. She and the other 2 women, with their children, form a strange household, filled with secrets and lies, combining women from vastly different backgrounds and viewpoints. Marianne still sees things clearly, and she’s not prepared for Benita’s very different take on things. Ania’s silence may be more than just reticence, and she too make choices that Marianne wouldn’t, although she may approve. Although the bulk of the book takes place just after the war, there are chapters from different points of view and different times. Will the characters manage to make peace with their circumstances and choices? There isn’t an easy answer. And although by the end, set in modern times, Marianne is being honored for her part in the resistance, she isn’t at all sure that she is the one to deserve it.

The Women in the Castle is gorgeously written, drenched in detail, nuanced and lovely. You’re drawn into these impossible situations, where things that were so black and white have now become murky and stained. The characters are sensitively drawn and well-developed, and I wanted to know more of their lives. I highly recommend it.

« Spoiler Alert: The Hero Dies
What’s on Your Nightstand January 30 »