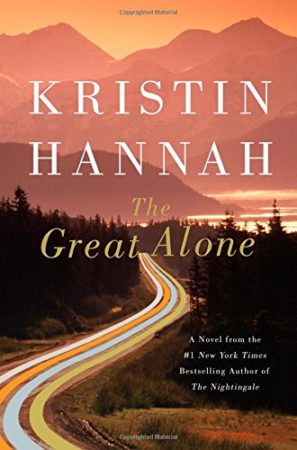 Whenever anyone asks me for a book recommendation, Kristin Hannah’s The Nightingale is at the top of my list. So I’ve been anxiously awaiting her latest, The Great Alone, based loosely on her own childhood in Alaska, and it did not disappoint.

13-year-old Leni Allbright loves her father Ernt, but he’s become increasingly volatile since returning from Vietnam, where he was a POW. When he learns he has inherited a cabin in Alaska from a war buddy, she hopes their move to the wilderness will be what he needs to return to the man her mother, Cora, insists he once was.

When the Allbrights arrive in Alaska, they are greeted by the locals with open arms, who set out to get them ready for winter. As winter, with its few hours of daylight, brutal cold, and other dangers grows closer, Ernt becomes more dangerous to his wife and daughter. The dark, along with his drinking, causes Cora and Leni to tiptoe around, afraid of setting him off.

Leni finds she loves the wilderness and embraces the changes to their lifestyle, but she’s lonely. She grows close to Matthew Walker, a boy her age whose ancestors settled the town. Ernt is jealous of Matthew’s father, and while Leni knows how dangerous their friendship is, she can’t stay away from Matthew.

I enjoy Kristin Hannah’s novels because they tackle difficult subjects with grace and realism. Each one feels different from the next, but all are clearly labors of love with hours of research. The Alaskan backdrop makes the story come even more alive, and when the setting moves back to the mainland, I felt as jarred as Leni did.

I flew through the pages of The Great Alone, earnest to know the outcome of this wonderfully written novel, and it has already earned a spot as one of my favorite books of the year.