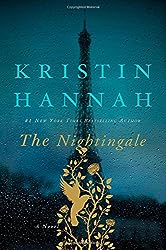 I’ve always enjoyed Kristin Hannah’s novels, and I’ve been waiting for her latest release for quite a while now. She’s outdone herself as it’s my favorite book of hers to date and my first 5 Star Read in quite some time.

Quite a bit has come out recently about the role of women in the French resistance during the Nazi occupation, and while doing research on World War II, Hannah came across the story of a young woman who created an escape route out of France. That story, and many others, are the basis for the characters and events of The Nightingale.

Viann and Isabelle are sisters who are very different, yet share a bond thanks to being abandoned by their father after the death of their mother. Viann, 10 years older, fell in love and married at a young age, and lives in a small village outside of Paris with her husband and their daughter, next door to her best friend and teaching in the local school. Isabelle is rebellious and difficult, feeling ignored by both her father and her sister and getting kicked out of school after school. She begs her father to let her stay with him in Paris, but shortly after, the Nazis arrive, and her father once again sends her away, this time to her sister, as Viann’s husband has been called to service. During the difficult journey Isabelle meets a man who is part of a resistance group and while Isabelle knows he is trouble, she falls for him, then disappointed when he too leaves her.

Isabelle is furious at her country’s surrender and it doesn’t take long for her to fall in with a group working to free France. She starts out with small tasks and as she earns their trust, works on larger, more dangerous missions.

Viann’s house, located near an airfield, is commandeered by a Nazi officer who takes up residence in her spare bedroom. Viann is naive and shocked at the treatment of the Jews in her town, as they are first fired from their jobs, then rounded up and sent away, but feels there is nothing she can do.

As Isabelle’s work grows more dangerous, Viann does what she needs to do to survive with a dangerous man in her home. The sisters are torn apart and brought back together again and again, each making mistakes and wondering if their relationship can ever be repaired.

Mixed in with the war years are flashes to the present, when an elderly woman is being moved out of her home by her caring but overbearing son. It’s not clear until well into the novel which of the sisters this is, and the flashes are just infrequent and short enough to not be intrusive to the meat of the story.

I don’t give 5 stars out often, but The Nightingale is a book that deserves them. The story is heartbreaking, the characters so real and believable. I enjoy WWII fiction and The Nightingale brings a different perspective on the war and what people had to do to survive.

One more thing – I suggest keeping a box of tissues nearby, I can guarantee you’ll need them.

« Superstars of History
The Cartoon Guide to Algebra »