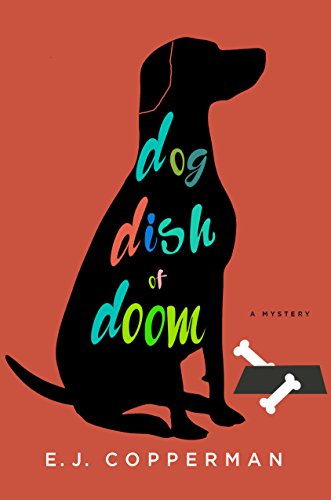 I know many readers for whom the cozy mystery is their go to for pleasure. I understand why they select books such as this, because the plot pacing is good, and if it’s well-written — as this one is — the characterization adds a bit of that character developed drama that I enjoy.

What tipped the scales for Dog Dish of Doom is the animal angle. Kay Powell is an agent, for pets only. Having grown up in a showbiz family, even performing in a family act with her parents, she tries to avoid dealing with the human types. Keeping up with her eccentric parents gives her enough of that. They stay with her when they don’t have a gig, which is more often now that their brand of entertainment seems to be drying up.

The novel opens with an audition for the musical Annie. Kay’s client Bruno the dog is amazing, and the director Les McMaster loves him. However, he smells trouble from owners Louise and Trent, so he writes in the contract that they are not to be on set when Bruno is rehearsing.

Before Bruno can even start the job, Trent is found dead, face first in the dog’s water dish. Kay wants to find out what happened, so that she’s sure Bruno isn’t in harm’s way (What if Louise is the killer?). Louise is acting fishy, and Kay ends up caring for Bruno. But then Bruno is threatened, and so Kay is concerned for his safety and her own.

This novel was infused with humor and never got too intense but definitely built suspense as different suspects are identified and new complications continued to arise.

I believe this is first in a series, and I’d be interested in reading more about Kay and her animal actors.

« The Other Alcott
The Half-Drowned King, a 5-Star Read »