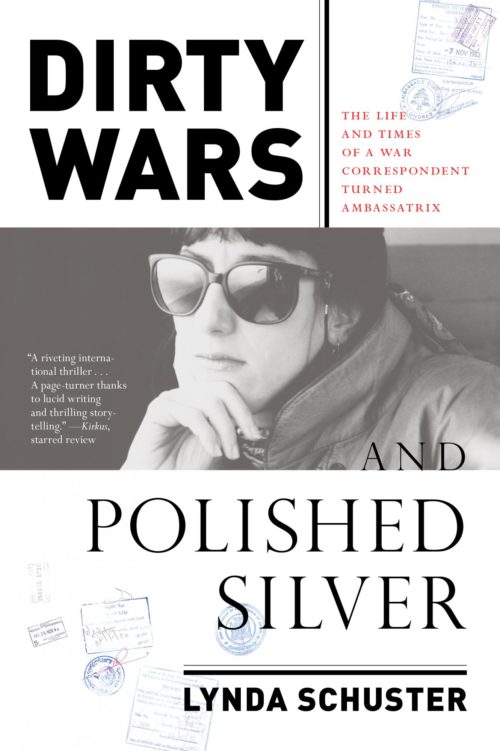 Lynda Schuster knew one thing growing up–she didn’t want to be like her mother, trapped in suburbia and dealing with nothing more exciting than teething toddlers or swim lessons for kids, recipes and shopping and crying over the loss of her husband, who’d left the family for a younger woman. As soon as she could she escaped at age 17, flying to Israel to spend a summer on a kibbutz in 1973. Why yes, that was the start of the Yom Kippur war, and Lynda’s introduction to the heart-stopping excitement and banality of war.

She returns to the States and becomes a journalist, landing a job with the Wall Street Journal who sends her to Dallas, where she struggles to find her place as a young Jewish woman in a white-male dominated industry. She manages to get sent to Central America to cover international events, and becomes a foreign correspondent. Latin America in the 80s was a place of turmoil. She meets the much older Dial Torgenson, another foreign correspondent, and the two fall in love and eventually marry, but their time together is short-lived as he is killed in a guerrilla attack before their first anniversary. Devastated, Lynda ends up in Beirut, which is perhaps not the most logical way to heal a heart-wound but they do say work is a way to fill the gaps, and dodging bullets certainly keeps you on your toes.

Eventually she meets Dennis Jett, a career diplomat, and finds love again. Lynda is a dedicated journalist and loves her career, and she has no intention of either marrying again or of giving up her work. So, for years, they see each other mostly on weekends, flying between neighboring countries. Lynda is now covering apartheid in South Africa, while Dennis is stationed in Malawi. When he gets posted to Liberia, he proposes, and she accepts.

Liberia, of course, is on the brink of its own brutal civil war, and the stories she tells are heart-wrenching and horrific. Eventually Lynda is forcibly evacuated and has to endure the harrowing reality that she might lose her second husband. Happily Dennis survives, and they settled contentedly in a charming little house in the DC area…until Dennis accepts a post as Ambassador to Mozambique, and Lynda is forced to attend a sort of finishing school for spouses of ambassadors, where she is quickly lost trying to learn such niceties as which corner of her visiting card to turn down to convey subtle messages. And the idea of being a trailing spouse, going wherever her husband is located, and yet again watching him face down risks and try to calm national tensions while always appearing coiffed and calm herself, is a greater challenge than interviewing guerrillas and facing down armed soldiers at checkpoints ever was.

I loved Dirty Wars and Polished Silver! Lynda Schuster’s writing style is self-depractating and humorous. On top of that, we have somewhat similar personalities. I remember a time when my greatest fear was suburbia, and while I haven’t traveled anywhere as extensively as she has, I have lived in my share of countries (although happily, none of mine have been war-torn). So I was predisposed to like this book. However, even if your adventure-style is firmly armchair only, there is much to enjoy in this book. Lynda gives us personal glimpses into the global events of our time, things that I remember (when the Peruvian guerrillas took hostages at the Japanese embassy for instance, or the Liberian civil war, or the events of apartheid) reading about in the news at the time. She’s able to look at herself honestly, while keeping in mind the bigger events going on around her. I highly recommend this book.

« If you liked #TheGlassCastle, you’ll love these memoirs
Can Reading Help You Survive Insomnia? »