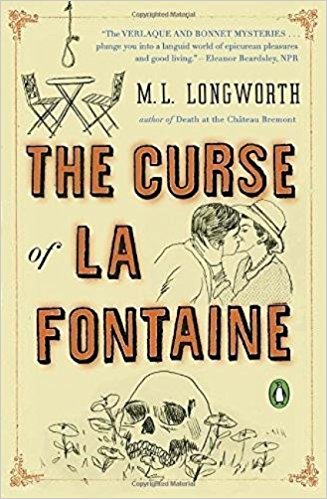 A garden in Aix-en-Provence, backing on to several houses and apartment buildings, contains an ancient fountain said to stop flowing when an unnatural and undeserved death has occurred. It was the site of  a seventeenth-century hanging and two World War II-era murders. Now Sigisbert “Bear” Valets, a young up-and-coming chef who trained in London, wants to expand his popular restaurant to offer garden seating, and he is getting a mixture of complaints and support from his neighbors. He is digging near the fountain when a skeleton is discovered, said to have been there about 8 years. And the fountain, of course, stops flowing. Are the two things connected?

The Curse of La Fontaine is the 6th book in a series about Antoine Verlaque, an investigative judge (a position that doesn’t exist in the American criminal justice system), and Marine Bonnet, a law professor. They are getting married as the story opens, both of them coming to marriage a bit older and more cynical, but excited none-the-less. They have practical things to consider; should they keep both their apartments and if so why, how much to let querulous parents into their lives. And now they have a  mystery to solve.

The book takes us into French society, dealing with everyone from aristocrats to African immigrants who arrived as stowaways on commercial vessels, with people who are an active and willing part of a diverse society and people who think themselves above it. While maintaining firmly a real sense of place, recreating local streets and alleys, views and scents, it also manages to look at issues facing people around the world–everything from ecological responsibility to immigration to friendships that endure from childhood to deciding who does and who doesn’t “belong.”

Reviews of the book emphasize its sense of place and call it a “foodie” novel. I didn’t really find it that way, although many meals are mentioned in loving detail. But what I loved about the book were the complex characters and a realistic view of modern French society in all of its contradictions and complexities. Admittedly, I only lived in France for a year, but thanks to being in an unusually friendly area for France and having elementary-age kids, we made lots of friends and spent many evenings in French homes, and I feel like I met some of these people! Not literally, of course, but author M.L. Longworth obviously knows whereof she writes. Several reviewers on Amazon said they love this series but found this one a little slower. That would be my one complaint, and it’s really very minor, so I’ll be looking for the 5 previous books in the series. A truly lovely book for a summer afternoon, preferably with a verre in hand!

« Girl in the Blue Coat
Among the Lesser Gods »