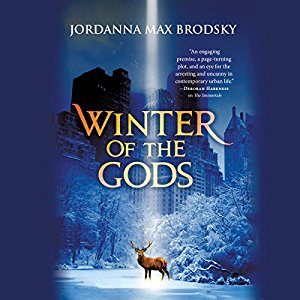 In The Immortals (linked to my review), book one in Jordanna Max Brodsky’s Olympus Bound series, Selene DiSilva, aka the goddess Artemis, and classicist Theo Schultz worked together to bring down a cult that was sacrificing women in order to bring the gods back the powers they had lost over the last few thousand years.

Winter of the Gods picks up a few months later, with Selene and Theo now a couple, continuing her work protecting the women of New York. When a new sacrifice is discovered to be the body of a god, they are pulled into the investigation, enlisting the help once again of Selene’s immortal family, along with Theo’s mortal friends.

The story again flips between Theo’s and Selene’s point of view, adding also that of the Hyena, the only female member of a cult working to resurrect the god they worship. The identity of the Hyena is a bit of a surprise, though the god’s identity, revealed during the climax of the story, was not as hard to discern.

Winter of the Gods has more flashbacks to Selene’s time as a goddess, highlighting the brutality she and her fellow gods often showed toward the humans that worshipped them. Selene also continues to struggle with her feelings for Theo and the knowledge that she will outlive him, forced to watch him grow old without her.

Winter of the Gods also features New York City landmarks as key components of the story, incorporating Rockefeller Center, the Statue of Liberty, and St. Patrick’s Cathedral, as well as many well-known statues that make up the city’s landscape.

Winter of the Gods is a classic second novel in a series and I look forward the the third, due out next year, where Selene goes in search of her father and must put an end to the threat to the gods once and for all.