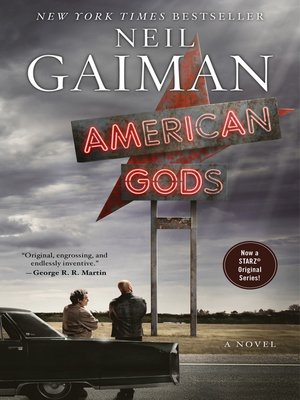 The premise behind Neil Gaiman’s American Gods is intriguing; that as people migrate around the world, they carry with them their gods. So that in America, as a land of immigrants, we would have floating around everyone from Mad Sweeney the leprechaun (brought by Irish immigrants fleeing famine) to Odin the Norse God (brought by the Vikings), Kali the Destroyer from India, Horus and Ibis the Egyptian gods, and more–only in a weakened form as not many people believe in them, and belief brings power. But as America changes, the new gods, gods of money and drugs and technology, are gaining the upper hand. In addition to this original look at religion and mythology, Neil Gaiman also wanted to write about America, a sort of travelogue of her small midwestern towns, roadside attractions, glittering casinos, dingy motels, and more. The result is an original tale that nonetheless bears his particular and inimitable style.

The story follows a man named Shadow Moon, who is about to be released from prison when the story opens, after serving half of a 6 year sentence for assault. He is looking forward to joining his beloved wife, and has a job waiting for him in his best friend’s business. Instead, he’s released a few days early for his wife’s funeral, and he finds that his wife and friend were both together when killed in a car accident. He meets, and meets again, the enigmatic Mr. Wednesday, whom the astute reader immediately and accurately pegs as Odin in the flesh. He eventually agrees to work for Wednesday as a sort of chauffeur/errand boy/bodyguard, and from there on out, things only get stranger. The two seal the deal with Shadow drinking 3 glasses of mead, the traditional drink of the gods, and winning a fist fight with Mad Sweeney the tall leprechaun (that’s the joke, see, to call them the little people when they’re really tall), which ends with Sweeney giving him a piece of gold, which Shadow drops into his wife’s grave as a parting gift to her, which causes her to enter a sort of half-life where she’s not entirely dead but definitely not among the living either. Sorry for that long and complicated sentence, but I’d like to see you sum up a Gaiman plot in a simpler manner. We are still not even a third of the way through the book at this point!

Complicating things are the new gods, of Media and Technology and more, with names like Mr. Road and Mr. Town, and television sets that begin to interact with Shadow. They seem to want Shadow on their side, and kidnap and beat him with abandon. At one point he’s facing death, but Laura, his undead wife, shows up and kills them both and releases Shadow, then disappears again. Shadow’s on the run and is sent to Cairo, Illinois, where he passes the time helping Ibis and Jackal run their funeral parlor–until first Mad Sweeney and then Wednesday himself show up. Shadow is then sent to the charming town of Lakeside, Michigan, where everyone is friendly and helpful, serving hot chocolate with extra whipped cream and sending him home with jars of homemade crab apple jelly.

A stand-off between the old gods and the newer ones is brewing. Wednesday and Shadow travel around, recruiting old gods to their side to join the battle. Why do both sides seem to care about Shadow? Can Wednesday, whose names include Trickster and who was father to Loki and Balder, be trusted? Who will win? Who should win?

There are myriad little asides, short stories of people’s interactions with various gods. (This book will send you to google, trying to figure out who’s who amongst Ukrainian folklore and Native American legend and more) As in any Gaiman book, be prepared for graphic sex and a lot of horror and gore.

STARZ recently released the book as a television series, which prompted this “author’s preferred version” of the book. I haven’t watched the complete series, but I was impressed by the bits I have managed to catch so far. It’s very accurate, and manages to capture the creepy, other-worldly feel of the book. (Gaiman may write about gods, but the idea of people finding comfort in their belief system seems very foreign to him) It also captures the gore; in the opening scene of Odin’s arrival to these shores, there are literally fountains of blood shed. In addition, William Morrow Publishing has released an adult coloring book with line drawings from the TV series, interspersed with text from the book.

If you like Gaiman’s somewhat skewed view of the world, you’ll love American Gods. And, between the new edition of the book, the coloring book, and the TV series on Starz, you can immerse yourself there.

« Lemons
Winter of the Gods »