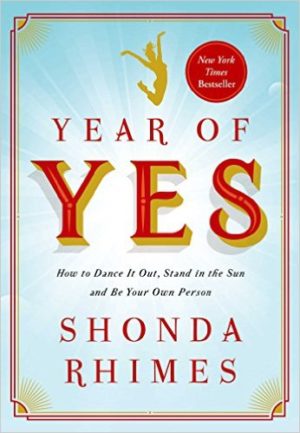 In May, I made a summer reading list of titles I’ve been wanting to read off my shelves. I gave myself a small goal for the summer. Looking at it now, I have to say “Oops,” or “One out of three ain’t bad.” I still want to get to the other titles, and I was glad for a little reminder to do so, but I did read Year of Yes by Shonda Rhimes. In fact, instead of feeling like I was behind on a book that interested me, I now feel pretty current, since it was just released in paperback.

Before I read this book, I was curious about the philosophy of saying yes to what scares you. I was also interested into getting insight into the mind of such a creative, successful person, Shonda Rhimes, the mind behind some of television’s most successful shows: Grey’s Anatomy, Scandal, and How to Get Away with Murder. Before reading the book, I was only a fan of Scandal (and a reluctant one, at that, loving the writing and plot, but wishing that it wasn’t so graphically violent and sexually explicit), but I don’t think that inhibited my enjoyment of this memoir at all. I might not have gotten all the Grey’s references, but I enjoyed witnessing the process that she went through with writing and creating and managing.

I don’t agree with all of her personal tenets, but this story about a person’s realization that she had somehow started living her life in fear and challenging herself to live in the sun instead resonated strongly with me. Before I read it, I had already decided that stepping outside my box would be good, so this summer I joined an online book club and took a beginning improv class. Exploring some new things shook me up a bit. They gave me a feeling of excitement that I hadn’t experienced in some time, which will encourage me to say yes to things that might scare me.

That’s what Shonda did. Being a successful woman, she was given many opportunities to do things: meet the President! address other influential women in entertainment! give the commencement address for her alma mater! But as her sister pointed out one day, “You always say no.” This memoir explores not only saying yes, but figuring out why she said no, exploring when exactly she became that person and what that had done to her over time. She also learned that very important lesson that saying no can be saying yes.

I’ve experienced quite a few changes in my life over the last couple of years, and I think that in some ways it made me more open to try new things, but in other ways, it tempted me to retreat into what was comfortable and familiar. Reading Rhimes’ book has been somewhat of a cautionary tale about not becoming too comfortable.

Also, after reading it, and after knowing how much my sister and my sister-in-law have enjoyed it, I will close in sharing one of the things I’ve decided to say yes to is Grey’s Anatomy. Netflix is not at all a stretch for me, nor something that is new and probably not even beneficial, but it’s certainly been enjoyable!

« Get Your Kids #ReadingWithoutWalls
Yesternight »