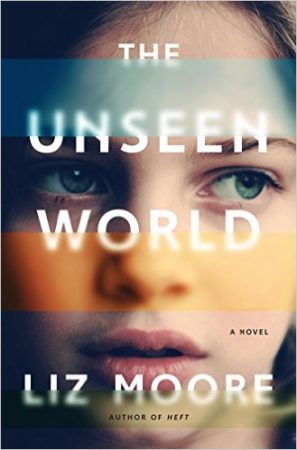 Covering a time span from the 80’s to the early 2000s to “soon” (a time slightly forward of 2016), to a time further in the future, The Unseen World captivated me. It delves into the emerging world of artificial intelligence in a time on the brink of all sorts of technology that we all take for granted. It’s about computer science, but it’s also about family or the lack of family.

Ada Sibelus is an interesting girl. She is the only daughter of David Sibelus, born to him via a surrogate. He’s an older than typical dad and an odder than typical dad. He schools her at home, or more specifically in the research lab. Educationally, she’s advanced, but emotionally she is anything but a normal 12-year-old girl. She has had almost no contact with children, and a stilted relationship with the other adults her dad works with, due to her shyness.

When David begins to show signs of early-onset Alzheimer’s disease, colleague, neighbor and friend Diana Liston takes Ada in. It’s her first time living in a family setting and with a mother figure. It’s her first time attending school with others. As David’s memory retreats, Ada finds it hard to visit. It becomes even harder when facts are discovered that indicate that David may not be who he claims to be. If he’s not who he claimed to be, and he’s the only tie to the world that Ada ever really knew, then who is she?

This element of the story as well as leap frogging to Ada’s future, kept me reading.

I am not describing this book well at all. The writing was beautiful, the story was unique and well-thought of, and the way that it transcends genre by including elements of character-driven suspense, family saga, and science make it truly one of a kind. I was in a bit of a reading slump when I picked this one up, and it cured me by getting me to keep my nose buried in a book.

« 738 Days
Another Brooklyn by Jacqueline Woodson »