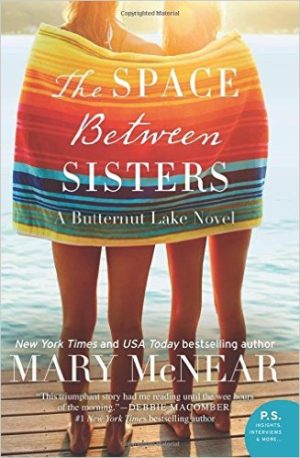 I selected The Space Between Sisters by Mary McNear thinking that the Butternut Lake novel would be a good and quick read by the pool this summer. I was right. Sort of. I enjoyed this book on so many levels, but it was not a light read, and I may or may not have been surreptitiously wiping away tears sitting on my lounge chair more than once.

When Poppy shows up unannounced at her sister Win’s doorstep on Butternut Lake near the start of summer, accompanied by Everett – whose last name she doesn’t know as she’s only seen him in her coffeeshop back in Minneapolis before asking him for the favor of driving her up – younger sister Win is taken aback.

Though Poppy and Win are only 13 months apart, they are miles apart in temperament. Raised by neglectful and now divorced parents – a flaky mom who wants to be a (fill in the blank at that moment) and a drunk of a father – who moved them each time they were evicted from a previous apartment – Win is the younger sister who is responsible and mildly OCD while Poppy is the older, drop-dead gorgeous sister who has never met a responsibility she couldn’t walk away from. I will admit that I was challenged by the older sister being the flake, as that goes so against type in “real life” and in books, but that is a minor quibble.

Poppy has arrived to stay the summer in the cabin their grandparents used to own that now belongs to Win, and Win can only see the wet towels left on the floor, dirty dishes everywhere, and no help on the food and other bill front. Poppy doesn’t get why Win is upset about Sasquatch – her elderly cat to whom Win is allergic – living with them and feels like her sister needs to loosen up, because Poppy was right: Win was reorganizing the utensil drawers (again) on the Saturday night when Poppy showed up.

The sisters have a somewhat challenging relationship with plenty of baggage outside their unusual upbringing. Win is still mourning her perfect husband’s death from cancer, though he has now been deceased longer than they were married. Poppy has walked away from yet another job and has no money or ambition – and truly no options if Win hadn’t taken her in.

As the summer goes along, both sisters explore their relationship and their relationship with others, coming to grips with some of the challenges they never left behind from adolescence, such as Win always feeling inadequate in her beautiful sister’s shadow. The book is riveting, and every time I had to put it down, I couldn’t wait to pick it up to read more of it.

Life isn’t easy, and this Butternut Lake novel doesn’t sugarcoat some of the challenges the sisters legitimately face. The end of the novel doesn’t provide resolution on all the issues brought up in the book, but it includes enough closure for it to be satisfying, as sad as I was to reach the last page.

The Space Between Sisters is the fifth book from Butternut Lake, but the characters are not the same from the previous novels. The first three books were a trilogy and the other is a novella about Christmastime at the lake. That said, the peace of mind and the scenery of the lake remains the same. I know I’ve read the Butternut Lake books in the past, but the quiet joy found in the latest novel is definitely prompting me to pick them up again.

Written by Michelle of Honest & Truly! who has her own complicated relationship with her sister. See the life she shares of food, tech, and travel on her blog Honest & Truly! and on social media where you can find her as @HonestAndTruly on Twitter, Pinterest, and Instagram.

« Visiting Hogwarts and Daigon Alley
The Girl from the Savoy »