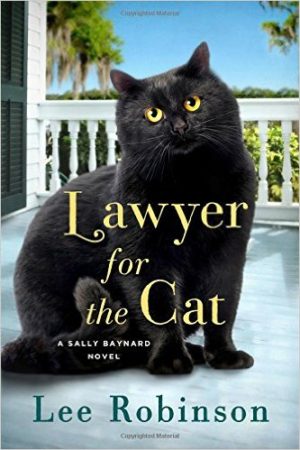 I read her first book, Lawyer for the Dog, just recently (read my review to find out more). I enjoyed it — specifically the characterizations of adult women friendships, care-giving for a loved one with Alzheimer’s, work/life balance, and of course the role pets play in our lives. All of these themes continue and grow even stronger in this most recent book, Lawyer for the Cat.

Even though I had other books waiting to be reviewed, I picked this one up as soon as it arrived. I really like the light tone of these books. They are a good escape. The plot moves along quickly enough to keep my mind engaged, but they are very low-stress. Though the character deals with some real issues, it’s in a way that just helped me relate, but didn’t cause me pain on behalf of the character, which does happen in some novels that are more focused on deep emotional character-driven stories.

In this novel, Sally Baynard is named the custodian of the cat when a woman dies and leaves her home and a generous stipend to one of the people named in the will as possible heirs for the cat. There is some suspense — in this case who is going to get the cat and what the characters might be hiding, but it’s a light suspense.

I like dogs more than cats, but I have to say that I enjoyed the cat-story more than the dog-story. The supporting characters were rich and interesting, and Sally’s interaction with them was interesting and showed me a different side of her character as well. I hope that means that Lee Robinson is hitting her stride and the next Sally Baynard novel will be even better.

« Life Verse Creative Journal
What’s on Your Nightstand, May 31 »