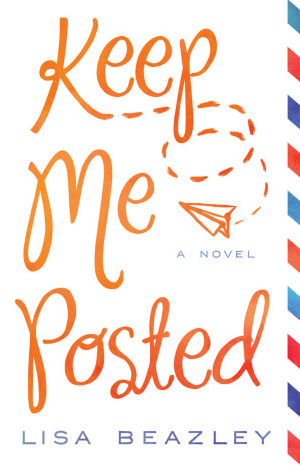 Cassie and Sid were close sisters growing up, but their adult lives now see them on complete opposite sides of the planet, and keeping in touch hasn’t been easy. Sid, in Singapore with her two kids and always-busy husband, lives a slow-paced ex-pat life, but never really embraced technology, while Cassie is never without her iPhone in her harried, NYC lifestyle. Keep Me Posted by Lisa Beazley tells the story of their attempt to reconnect via handwritten letters, a plan that goes smoothly until a tech glitch turns both their lives upside down.

Their letter-writing project begins shortly after spending time together for a family holiday, when they realized that they don’t know a whole lot about each other as adults. Putting good old fashioned pen to paper should help them to feel closer again, and the plan goes smoothly… for a while.

In an attempt to keep a record of their exchanges, Cassie opts to scan all their letters and upload them to a private blog. That privacy setting doesn’t stick, though, and soon enough their heartfelt letters, filled with sentiments and statements that neither would ever want out in the public have gone viral and are a trending topic.

The resulting fallout is pretty nasty for both Cassie and Sid, but of course, this being a novel, even the initially bad results turn out to spin fairly positively.

I had trouble reading this one at times because of my growing frustration with Cassie, whose denial felt a bit too immature and almost sitcom-like. There were plenty of times in the book that I felt she could have gotten control over the situation but she opted to ignore it, making for a longer story filled with more ups and downs, but making me groan inwardly again and again. But I couldn’t deny the realism of the portrayal of modern marriage, the role that social media plays on our daily lives and relationships, and the draw of strong sister bonds.

« The Summer of Me
The Year We Turned Forty »