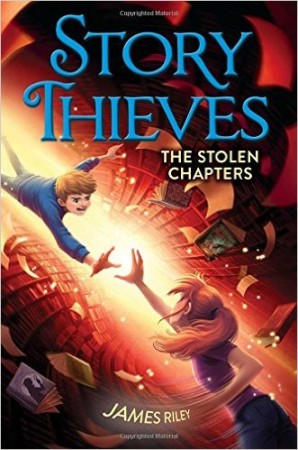 Story Thieves: The Stolen Chapters is a great continuation of the series. My son and I read the first book aloud when it first came out, so I could tell he was enjoying it. We waited for the second, and when it arrived, he wanted to read it aloud as well. If you never read aloud with your tweens, I highly recommend it! It’s fun sharing a book in real-time and laughing together and hearing his theories on where the book is going.

If you didn’t read Story Thieves, you’ll want to catch up, but this is a story for booklovers. Bethany and Owen are big fans of books, authors, series, characters. Bethany is able to actually jump into stories, but she has all sorts of rules so as not to upset the fictional worlds she visits. As in the first book, they don’t really stick to these rules.

Owen and Bethany and Kiel are back with the addition of a few new characters, including Doyle Holmes, the great- great- great- something grandson of the great Sherlock Holmes. When the book begins, there are more questions than answers. Owen and Kiel are in Owen’s mother’s library, and it’s on fire. They escape but are framed for starting it. The person who framed them also told them they have to find Bethany within the time shown on their watches — about 2 hours — or it will be too late. The first chapters are excerpts that are mostly blacked out. These are the missing chapters that are filled in as Owen and Kiel eventually remember what happened that got them into this predicament.

These books are clever and smart, and I feel that this second installation is growing in maturity with the reader. The plot isn’t hard to follow, but it’s definitely a complex story structure, as the missing pieces in Kiel’s and Owen’s memories are filled in. Especially at the end where the twists and turns are revealed, one had to have been following along to really appreciate it.

My son is almost 12, and a 3rd book is promised, and so I’m glad that he won’t feel as if he has outgrown the series before it’s over.