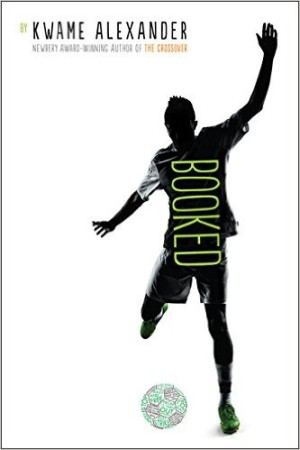 Kwame Alexander won the Newbery for The Crossover. In the description, Booked is described as the “follow-up,” which I mistook for sequel. Of course, I figured out quickly that this was a completely new story about a new guy — Nick — who has different problems: a Dad with verbomania* and parents who aren’t getting along, and who likes a different sport — soccer, and a different girl — April.

*Verbomania is an obsession for words. His dad is so obsessed with them, he literally wrote the book on them, a dictionary of unusual words, which he forces Nick to read each day. His mom trains horses, which she can’t do where they live, so she’s decided to move to Kentucky for a while. Add to that twin brothers who are hassling him, and Nick is a little discouraged with his 8th grade year in general.

There are a few things that make it better. His best friend Coby understands everything and shares his love for soccer. Both of their soccer teams have been invited to a special tournament in Dallas. Even though Nick doesn’t like to read, the school librarian Mr. MacDonald, The Mac for short, is cool. He lets Coby and Nick hang out there and play blackjack.

This is a novel in verse, and it’s amazing to see how Alexander can advance the story and evoke such feeling with just a few words.

The book releases April 5, so pre-order now or reserve a copy at your library. I’m sure it will be in demand!

« Somewhere Out There
Story Thieves: The Stolen Chapters »