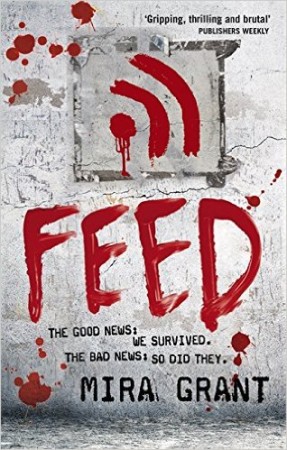 This book — the first in a series that is already finished — was on sale at Audible, and I couldn’t resist it: blogging, news media, a political election, and zombies. What? It’s a futuristic dystopian novel that focuses on a worldwide epidemic, which is where the zombies come in. The society has taken major steps to deal with them, so the contagion is much more of a plotline than zombies in particular.

Before I bought Feed, I did glimpse at the reviews for books two and three, Deadline and Blackout, avoiding spoilers but just to make sure the series held up, and it did.

This book came out six years ago. It’s interesting to hear how much things have changed since then. It takes place in 2034, and there are some interesting technological advancements, but things like flip phones still exist, which was an amusing anachronism here in the 2016 world.

Notes on the audiobook:

It’s a loooong book, and a long series, and sometimes that’s good, but know when you get started, you have about 1900 pages ahead of you to reach the conclusion. The first audiobook was 15 hours long, which I actually prefer, because audiobooks are expensive, and longer ones aren’t usually more expensive, so more bang for my buck is the way I roll.

This book has two narrators, for the two main characters Georgia, voiced by Paula Christensen, and her brother Shaun, voiced by Jesse Bernstein. The alternating POVs — pragmatic Georgia and skeptical, impulsive Shaun, do a good job of furthering the story and showing different approaches that the twentysomethings took to growing up in that kind of world.