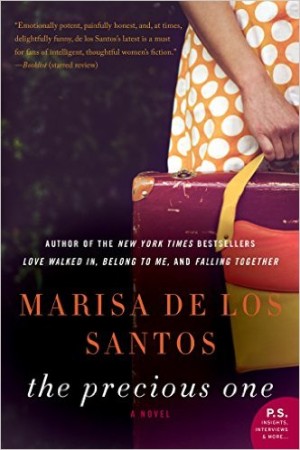 We are all familiar with second chances, with a father who finally finds and accepts love and happiness with a new wife and child, or with a woman who’s screwed up relationship after relationship until she finally settles down and lives in joy. These stories are a standard trope of modern literature. But what happens to those first, failed people? How do they grow up and move on? In her latest novel, Marisa de los Santos takes a look at both a first and a second family, and what happens when fate, in the form of an irascible, arrogant elderly man, brings them together.

Eustachia, known as Taisy, and her twin brother Marcus were abandoned by their father Wilson Cleary when they were 18. He had always been an absent father, but now he makes it official–and makes it abundantly clear that they are the ones who have failed him, who have not lived up to their potential but have instead been ordinary and disappointing. 18 years later, they’ve moved on, at least somewhat. Marcus is a successful man in the field of finance, and Taisy has become a ghost-writer with a string of well-selling books to her name. She tells her friend that in all her life, she has only loved 3 men; her father in spite of his flaws and rejection of her, her twin brother, and her high school love Ben.

Meanwhile, Willow is the child of Wilson’s second family, beloved and sheltered. Raised by a young artist mother, who suffers from somnambulism and vagueness, and at the focused point of Wilson’s high demands, at 16 she is highly educated but has been homeschooled and sheltered from her peers, so that she’s awkward and skittish.

One day Taisy gets a call out of the blue from Wilson. He’s had a heart attack and his health is frail, and he wants her to ghost-write his memoir, which he will essentially dictate. This means that Taisy will have to not only visit but stay with Wilson, Caro, and Willow. Meanwhile Willow is dealing with public high school for the first time, and she’s having a hard time navigating it all. Her only ray of sunshine, the silver lining behind the clouds, is her sympathetic AP English teacher, Mr. Innes. The two of them eat lunch together every day, while Willow pours out her soul into his sympathetic ear. The story is told from both points of view, and de los Santos does a masterful job of characterization on the two of them, deftly navigating their awkward meetings (Willow is not used to sharing Wilson’s attention; Taisy is patient with Willow but recognizes the chasm between them can be bridged).

The Precious One is classic Marisa de los Santos. I really like her writing. She comes up with plots that are complex and realistic, and she can string together words to produce phrases that just sing. An example: “He smiled the kind of smile that is the reason for wars and poetry.” (p. 296) But she is beginning to cliche herself. Things you find in a de los Santos novel are all here–young love, high school students who get really excited over classic literature and the fact that light acts as both a wave and a particle (!!!), estranged family members, people in their 30s who made mistakes around the ages of 17-22.

I love her writing. I stay up late to find out what happens. But her characters are all a bit too distinct to her, if that makes sense. People do change and grow, but I found it completely unrealistic–to the point of distraction–that Willow could change that much between September, when the novel opens, and Thanksgiving weekend, when they are all together in an awkward but ultimately happy home. Willow’s character initially was so well-drawn, pitch perfect, but she should have changed like that over several years, maybe never quite that much. And de los Santos’ high school boys are not like real high school boys. I know. I had one who loved to read and think and was very well educated (he grew up in the French system overseas, where they read Descartes and Balzac in middle school) and he is remarkable, yes, but nowhere near as mature as the high school boys in this novel, who are more mature and unselfish than most 30 year olds.

I both loved this book and was exasperated by it.

Note: You can read Jennifer’s review of the hardback version here.