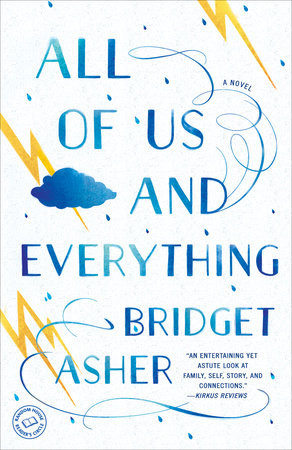 A storm brewing over the Atlantic, an attic wall lined with windows in a house in Ocean City, New Jersey. Augusta lines up her 3 daughters at the windows–Esme, Liv, and Ru–and gives them each conductor’s batons. She tells them, “Storms are one way to define people. There are those who love storms, those who fear them, and those who love them because they fear them.” (5) And she teaches her girls to conduct the storm to the music of Berlioz’s “Symphonie Fantastique.”

This memory stays with the girls as they grow up, in a female-only household. Their father is absent, their mother tells the girls that he’s a spy, but Esme thinks that just shows her mother’s lack of imagination. But somehow, each girl ends up with her own issues. Esme and her husband have one child, the precocious Atty (named for Atticus Finch, because Esme knew she wanted to reference the book but didn’t want to name a child Scout). Atty puts everything on Twitter, wears a fanny-pack ironically, but is actually drowning in adolescence, dealing with bullying, panic attacks, and more.

Liv, meanwhile, is addicted to prescription drugs and serial marriage. “Love loves me,” she says, but she doesn’t really know what she means. She wants stability but is teetering precariously close to the edge.

Ru wrote a best-selling book, based on her sister Liv’s high-school boyfriend. It was also made into a hit movie. But now she’s stuck, unable to write another. She’s fled her life, her agents, her fiance, and is living in a remote Vietnamese village, in a long house with 17 other females, supposedly taking notes for a new book but really just avoiding life.

Hurricane Sandy hits the east coast, and among other things, unearths a box that holds this family’s secrets. Who is their father? Was he really a spy? How will the information in this box change their relationships with each other?

All of Us and Everything

is a really fun read. The characters are funny and quirky, playing off each other delightfully. Although in many ways it’s a light read, it is nonetheless looking at how women, especially sisters, relate to one another as adults. It made me want sisters! (not for the first time, I might mention.) I thoroughly enjoyed reading it, and recommend it highly.

« No Baggage: A Minimalist Tale of Love and Wandering
My Father’s Wives »