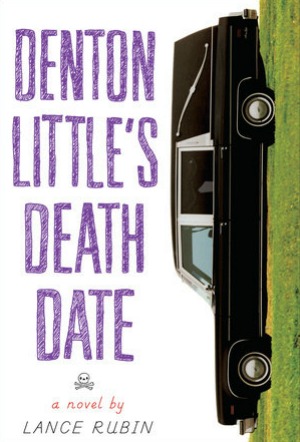 My teenage son was perusing the comic book section of our local public library, and while I actually quite like that all three of my children are interested in comics and graphic novels, for they have a unique style of storytelling and character development, I still encourage them to read novels, too. Since he’ll take most any book recommendation I give, I started looking at the YA novels on display. It didn’t take me too long until the cover of Lance Rubin’s Denton Little’s Death Date made me do a double take. I mean, look at it up there!

The book did indeed come home with us, and the next day, the fifteen year old was handing it over to me with an enthusiastic, “You have GOT to read this one.” He was completely taken with it, and a day later, I felt the same way. So here I am telling you that you simply must read this YA novel released earlier this year.

As the book opens, 18-year-old Denton Little is waking with a massive hangover and the realization that he is not in his own bed. Oh, and then he remembers that today is his funeral, because tomorrow is the day on which he will die. See, in this novel’s world, like ours in every other way, people are tested at birth and the vast majority have their deathdate detected. Parents tell their children when they see fit, even if it means, as for Denton, that they are classified as an “Early.”

The meaning of a funeral gets changed up a bit in Denton’s reality, giving family and friends the opportunity to eulogize the deceased to his face the day before they actually die. Mentally preparing for that may be unimaginable to us, but remember that the knowledge of one’s deathdate is a regular part of life, and Denton has attended funerals in the past. In addition to the funeral, Denton’s societal practices also include a gathering dubbed “The Sitting” in which very close family and friends sit with the individual who is to die for the 24 hour period of their deathdate.

Honestly, this whole concept was blowing me away as I read, and not only is the plot such a creative take on how we think about death and dying, but the writing itself is just plain fun. Denton is an earnest, honest, and highly likable teen character with a wit that is still shining through even as he’s facing his very near mortality. Now lest you think that the story must be a complete downer, let me reassure you that humor is a key element, and I was laughing out loud again and again as I read. I don’t want to give away too much of the plot, but know that there is a bit of a love triangle; some last-chance-ever-to-do-this attitudes toward sex, drugs, and drinking; and obviously more than a little danger for our title character.

If you’ve got a teen looking for an original read, or if you’re an adult reader interested in a quirky novel with genuine teen characters, give this one a go!