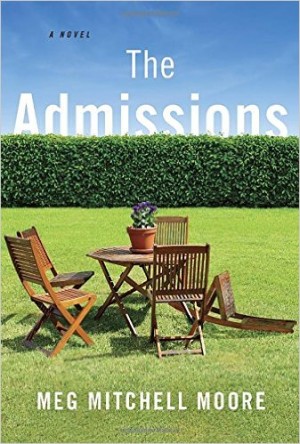 For her last 2 years of high school, my daughter did the IB Diploma. It’s very academically rigorous, an entire course that includes specific classes such as Theory of Knowledge, plus a 20-page Extended Essay. My son did this too and found going on to a State college easy, even at 300 and 400 level classes (he got a year’s worth of credits for his IB Diploma). But Ilsa sometimes seemed to be drowning under it. Last year ended up being a difficult one for our family. And so I was uniquely prepared to read The Admissions, by Meg Mitchell Moore, the story of one such senior and the toll such high expectations can take on our kids.

Angela is one of those perfect high school seniors–top of her class in an exclusive Marin County school, National Honor Society, cross-country runner, AP classes, well-rounded, succeeds at everything, has planned on going to Harvard for her entire life, ever since her dad bought her a crimson Harvard sweatshirt when she was 2. And it’s crunch time–fall of her senior year, early decision college applications due. The pressure is on and it is intense and crushing.

She’s not the only one feeling overwhelmed though. Her mother Nora, a real-estate agent, is desperate to sell a property that the owners insist on asking 8 million for. Her father, a Harvard grad himself, is under some weird pressure by a new intern at his firm with a nasty habit of googling her superiors, and then going further to search out their secrets. Her younger sisters have their own issues. Cecily is a star Celtic dancer, with hours and hours of practice to accompany it. Maya’s in second grade but still can’t read, a fact for which Nora blames herself.

The book unspools throughout the early months of fall, told from various viewpoints, including Nora’s emails to her sister. We watch the family, each under ridiculous amounts of pressure, heading for dates with disaster in their own ways and at their own times, but we know they can survive–if they make some painful changes.

was a delight in many ways–quirky and funny–in some ways it was a painful read for me. Ilsa didn’t even do sports and extracurricular activities, at least not as many as Angela does, plus we didn’t expect her to go to an Ivy League school, and it was still a rough year. However, The Admissions is a serious message about priorities and perspective packaged in an enjoyable read. Overall I loved it, and it’s a book I’ll keep to read again. Highly recommended. And IB? Ilsa’s glad she did it. She says college would be a lot more difficult if she hadn’t. I’m just glad I don’t have to go through the college application process again!

« No Yeti Yet, with #Giveaway
Over the River & Through the Wood: A Holiday Adventure »