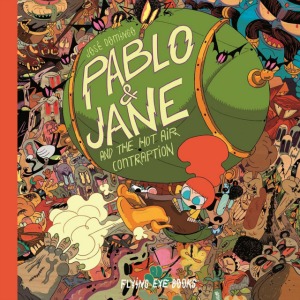 Imagine an oversized picture book filled with comic strip style storytelling, with a bonus of twelve two-page spreads of Where’s Waldo-style search-and-find activities smack dab in the middle of the plot. All you have to do is pick up Pablo & Jane and the Hot Air Contraption by José Domingo to experience the adventure, and you may find a child in your life totally engrossed in its pages right away.

Inspired by their boredom, and the fact that they’ve read all their comics and played with all their games and toys, Pablo and Jane head out to explore the one thing in their neighborhood that they haven’t yet checked out– the old house on the hill. (Now mind you, you get an instant sense of Pablo and Jane’s adventurous and kooky spirits, as well as the wild happenings yet to come when they mention all the other places they’ve previously explored– “The crooked custodian’s forest beyond the school, the haunted orphanage, the ruined asylum, the disused crossrail, the old graveyard, the abandoned sawmill, the tunnel of whispers…”)

Though Pablo is less inclined to head out on this particular exploration, Jane insists and even as things get hairy, the smile of excitement doesn’t seem to leave her face. It doesn’t take long at all for the pair to cross paths with some interesting creatures who lead them into a disheveled lab full of unfinished business. It is here that the adventure takes a totally weird, other-dimension type of turn as Pablo and Jane are pulled into an alternate world filled with similar cities as ours, but inhabited by monsters instead. A talking rat and his nemesis– a talking cat, of course– lead their trip through twelve different alliterative places like Lopsided London, Terrifying Transylvania, and Monstrous Moscow.

While the story continues through these pages, it does so in a different manner than the previous pages, which were all in comic format. These next pages are set up as search-and-find pages, as Pablo & Jane seek out specific small parts needed to repair the hot air contraption in order to return to their home dimension. Though it doesn’t look good in the end, as indicated by the increasingly larger letters and abundant use of exclamation points, Pablo and Jane do indeed find their way home again. But a surprise twist in the end of the story gives the indication that we may not have seen the last of their adventures.

My nine- and seven-year-old kids have been on a comic book and graphic novel kick for several months now, and this unique take on storytelling through graphic images has hit the spot for both of them. This is the kind of book with which they can spend extended periods of time, simply poring over the pictures, and especially trying hard to spot the small pieces in the pages that have pictures across every square inch. I find this combination quite interesting, as it’s a different take than the average search-and-find books by including an ongoing plot. Even when the adventure gets totally crazy, Pablo and Jane keep trying their hardest to make it home, and you get the sense that they’re even enjoying their tromp through the Monster Dimension, at least a little bit. Young readers will have a blast!

« The Dog that Saved Stewart Coolidge
Water on the Moon »