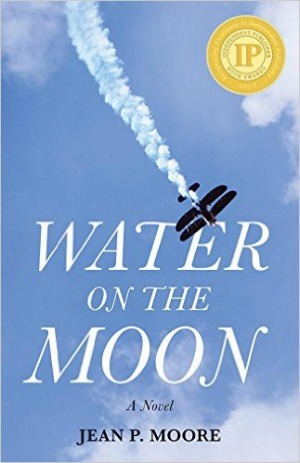 The opening scene of Jean P. Moore’s novel Water on the Moon sees its protagonist leisurely lying in bed, a rare occasion afforded her by the fact that her twin teenage daughters have a day off from school. But her relaxation is suddenly jarred when she realizes that a strange sound in the distance is getting closer. She rouses her daughters and drags them to a closet under their staircase as the sound becomes louder than ever. Lidia’s quick thinking saves their lives, for the staircase is left standing when most of the house crumbles under the impact of the plane that has crashed directly into it.

What follows is both a story of family and personal upheaval, most of it a result of the plane crash, but other aspects of it more longstanding. Thankfully, the Ravens have a friend nearby who willingly and lovingly opens up her home to them when they find themselves homeless, with only the clothes on their backs. The logistics of rebuilding their home get put on hold as both local and federal police agencies investigate the crash, and Lidia is once again shocked in the days following the crash, when a reporter contacts her, hinting at a connection between her and the young woman who was piloting the plane.

The after effects of Lidia’s divorce from the girls’ father still remain, as well, and her inability to forgive her husband for leaving the family after coming out as gay has left an impression on the girls that has influenced their decision to keep their father at a distance in their lives as well. During their stay at Lidia’s friend Polly’s house, Polly encourages all three of them to reconsider their feelings toward him.

Lidia begins to seriously reflect on the way she’s reacted in the years since her ex’s revelation and departure, and between this and her attempts at personally researching a possible connection to the airplane’s pilot, she is emotionally stretched and strained. The support she begins to receive from the FBI agent handling the investigation makes her start to feel an attraction that has been absent from her life for a long while, and their budding relationship adds another layer to Lidia’s saga.

The title refers to an event that happened on the same day in 2009 as the plane crash in which NASA discovered water molecules on the moon. In a passing reference in the final pages of the novel, the metaphor is quickly explained through a thought Lidia has as she falls asleep one night.

Though the entire novel comes in at just a little over 200 pages, there is a lot of plot going on between its covers. At times, especially as the mystery revolving around the connection between Lidia and the pilot is revealed, it felt a bit overwhelming to keep track of the multiple plot lines, but overall, I enjoyed sticking with Lidia through the tough challenges she faces in this novel.

We’re happy to be participating in the TLC Book Tour for Water on the Moon.

« Pablo & Jane and the Hot Air Contraption
Between Gods: A Memoir »