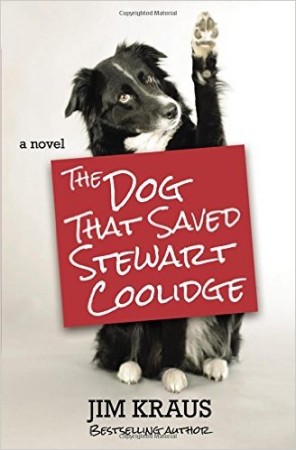 It’s a sweet, simple love story. It has a cute dog on the cover. What else could you want? If you’re me, you might think of a President with a similar name and think you are getting some historical fiction thrown in, but you’d be wrong.

The Dog that Saved Stewart Coolidge is about a young man who has recently graduated from college, but like many of his generation, Stewart hasn’t found meaningful employment. He’s paying his bills by bagging groceries. One day a dog comes in the store and grabs a rawhide bone. It happens several more times, and Stewart’s life and this dog’s life get tangled up in a way that benefits both of them.

My 11-year-old son saw the cover while I was reading it and said, “It’s about a dog! I have to read it.” After finishing it, I determined that he could indeed read it if he wanted to. He’s read several chapters, and he likes it too.

The novel is sometimes about Stewart’s life and struggles, mostly loneliness and identity or purpose, but it’s mostly about the dog he and neighbor Lisa come to call “Hubert.” Some of the chapters are even from Hubert’s point of view, and I loved that. Hubert sees Stewart’s loneliness and knows that his kind — dogs — do better in packs, so perhaps he and that kind female human Lisa should form a pack.

Lisa is in the same situation as Stewart. Since graduating college, she hasn’t been able to find a job in journalism. She’s working at a coffee shop, but when Stewart tells her the story about the bandit dog, she writes it up and submits it to the local weekly paper. She becomes the face of the story, even being interviewed on TV.

I won’t tell any more about the plot, but if you like animal stories, and clean fiction, you should check out Jim Kraus’ novel.

« Ghost in the House: A Lift-The-Flap Book
Pablo & Jane and the Hot Air Contraption »