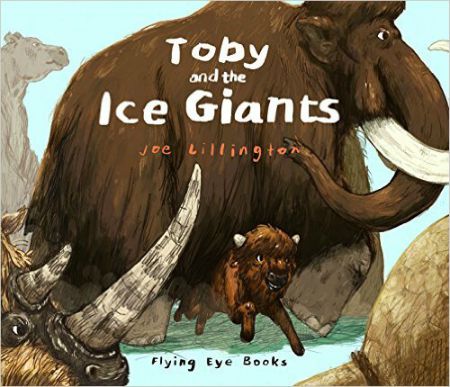 If you imagine Earth 15,000 years ago, the wild creatures living in the last glacial period were well adjusted to the tundra environment. Many were huge in size, some were covered in thick woolly hair, and some were fierce hunters. In Joe Lillington’s new picture book Toby and the Ice Giants, a young ancient bison crosses paths with eight of these creatures.

The ancient bison is a direct ancestor of the familiar American bison, and this particular little guy is kind of cute. With little horns and thick, brown fur, little Toby gallops away from his herd for his adventure. Like a child of any kind, Toby has a curious spirit, and in his wanderings he first meets a Woolly Rhinoceros, much larger, with fierce looking horns. Thankfully he isn’t in too much of a fighting mood, and lets little Toby continue on his way.

Among the other animals Toby encounters are the ones that might be expected- the Woolly Mammoth and the Smilodon, or what most folks might know as the sabre-toothed tiger. The others may be less recognizable- a giant shelled creature related to today’s anteaters and armadillos called the Glyptodon, the largest flying bird in North America called the Teratorn, and Megatherium, a massive ground sloth, among other interesting now extinct animals.

What I like best about this book is the marriage of a picture book and a nonfiction informational text for young children. Toby’s journey resembles those of other young picture book characters, a child out to explore the world. The banter between Toby and each of the creatures he encounters propels the story along, while a section of the page is dedicated to stats on the highlighted animal. The size, weight, diet, habitat, and time of extinction are all listed, along with a few short paragraphs about the animal’s life. This combination entertains while informing, and makes this book quite accessible to both younger children and older elementary schoolers.

Lillington’s illustrations are lifelike and done in earthy tones, suitable to the icy tundra and grassy plains environments. The overall feel of the book is lighthearted, even as Toby comes upon some animals that would have been ferocious. One particular type of animal may especially delight young readers who may not have expected something (or, perhaps better said, someone) so familiar around the now extinct creatures!