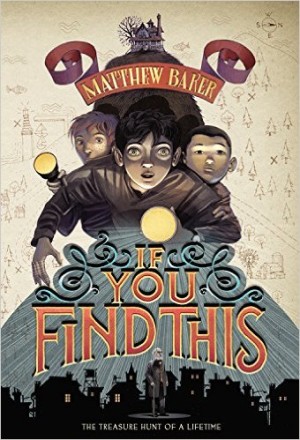 If You Find This by Matthew Baker is billed as the treasure hunt of a lifetime. I found it to be more of a journey than a hunt, one in which a bunch of misfits and two old men come together for a common cause and end up finding a lot more than treasure.

Nicholas is not living an ideal life. He lost his brother years ago. His brother is now a tree (which you must read to believe). His dad is living apart from them, because money is tight, and he’s gone where he can try to earn some money. He doesn’t have any friends at school, and now his memory-deficient grandfather has come to live with them. But when his grandfather wanders off in search of treasure, Nicholas thinks that he may hold the key to their financial troubles.

Nicholas tries to solve the puzzle with the help of some others from school, who aren’t in it for friendship or adventure (or are they?) but for money.

The notes Nicholas buries in his underwear drawer starts the story off with a bang, saying that if someone finds them, then it’s probably because they are cleaning out his clothes because he’s dead.

If you find this, you’ll know the truth. I’m going to write down excactly how everything happened. I’m not going to lie and make myself seem braver or smarter than I actually was, because I wasn’t brave, I wasn’t smart, I was afraid, and even if I got all A’s and had square roots memorized, there were problems I couldn’t solve alone. If I’m dead, I’m sorry. We had to risk everything.

This is a quirky book, brothers that are trees serving as a prime example. One might think that the note is over the top, because honestly, they were never in danger of death as far as I could see, but it underscores the real vulnerability and honestly of Nicholas, our hero. He thought he was in danger, and yet he persevered to save his family. In addition to being a math genius, Nicholas is a musician, so he writes his story in musical terms. They are written in a subscript throughout the story, like stage direction. Just another quirk. If you like quirky, as I do, it will add to the uniqueness of the story, but if you don’t, then this isn’t the book for you. 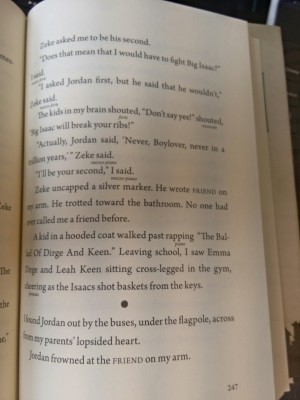 Though this is marketed as middle grade fiction, it’s definitely something I’d only recommend to the upper end of that category, older middle schoolers. There are lots of bullies, and as my 6th grade son will tell you, kids hear about bullying ALL the time from their school administrations, so that’s a fitting topic, but it crosses the line into a category that I feel requires some discernment. Some of the names used throughout the book are “Flatface,” for a Korean boy, and “Boylover,” which I guess is an updated epithet that boys have always hurled at one another.

I recommend this book with some reservations, but I think that if this book gets into the hands of the right kid, it will speak volumes, forte, to them. It’s not for the immature or casual reader, but I am sure that there are plenty of kids who will relate to Nicholas and Zeke and Jordan on a much deeper level, and that kid will get it.