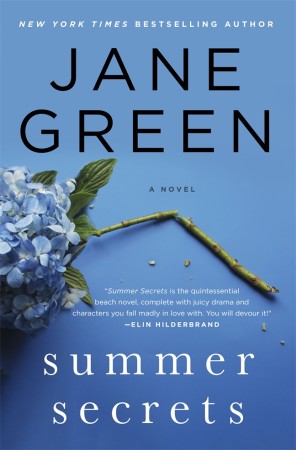 Summer Secrets opens in 2014 with Cat in London, cleaning out kitchen cupboards, finding a half-empty bottle of vodka, and freezing. “I know what I should do,” she says. “I know I need to pour this down the sink, but before I do, let me just sit here a while longer, worship at the altar of the god to whom I was once enslaved. Surely that won’t do any harm.” (3)

And then we time travel with Cat back to 1998, when she was 29 and reminiscing about how she got started drinking, and why–because it made her feel a part of the group, an essential life-giving element to any party or good time. She was an ungainly teenager, but vodka gave her a confidence to shine. And so it became a regular part of her life. Cat had a good relationship with her mother but was kept at a distance by her mother’s depression, and her father was distant, cold, and borderline abusive–verbally dismissive and emotionally unavailable. His recent death has given her mother a sort of rebirth–she’s sold the house, gone naturally grey, switched to more comfortable clothes, and reinvented herself. She feels it’s time she told Cat the first of the “summer secrets” of the title. And, to no one’s surprise, Cat learns she has another family in America.

Cat’s thrilled–she’s always wanted siblings, a loving and supportive father. She makes plans to travel back to Nantucket to meet them. But the dark undercurrent of her drinking begins to make itself felt. She meets and falls in love with a man who rescues her one night while she’s blackout drunk. A recovering alcoholic himself, he won’t even date her until she’s been sober for a year. So she begins to try to control herself, for him. Adding in a stressful vacation to the mix proves disastrous, and Cat returns from her summer in Nantucket feeling she’s burned her bridges and ruined any chance at relationship with her new family.

Back in 2014, Cat is herself in the recovering category at last. After years of denial and heavy drinking resulted in her losing her marriage and child to her alcoholism, she finally got serious enough to begin attending AA meetings, getting a sponsor, and doing the work. She’s doing really well, but she’s lonely. Her sponsor pushes her to make amends to the American family she damaged so badly before, so Cat plans a return trip to the island, only to reveal even more secrets.

is a great summer read. I like my beach reads to have some depth, and this fits the bill. Even when she’s making bad choices, Cat is sympathetic and you’ll find yourself on her side. After all, we all have things we struggle with. Although you may figure out the secrets ahead of time, that’s really not the point of the book. Instead, this character-driven novel takes a look at all our varied types of relationships (parental, friendship, sibling), betrayals of different types and their consequences, and when forgiveness is possible. Gratitude is key to enjoyment of life and healthy relationships. And Cat embodies so many possibilities, while remaining a flawed and realistic character like all of us. Recommended.