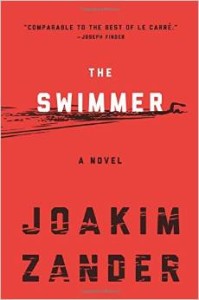 In most thrillers, you know who the hero is – or will be – and follow their path to unravel the mystery presented by the author. Though there may be twists and turns within the plot, you feel fairly confident that you know the general direction its taking. In The Swimmer by Joakim Zander, you never learn who the “I” in the first person narrative through some of the book is until nearly the end.

Perhaps intentionally, the book begins in a confusing manner, jumping from character to character and present day to various flashbacks in an effort to give you some information but not enough to really get the gist of where this all is going. Trying to sort out the characters and keep all their history straight is a bit of a challenge, but hang with it. It does eventually make sense why Klara Wildeen is on an island in Sweden with her grandfather hunting ducks before being called to work on a Sunday by her EU Member of Parliament boss back in Brussels. And the same with all the other flashbacks and various scenes that sometimes feel as though they are not all meant to be from the same book.

The Swimmer refers to one of the main characters, an American who tells his story in first person, with no name. He is a US agent whose life in Damascus is ripped apart by a car bomb meant for him that instead that kills his wife as she is going to get medicine for their sick infant daughter. He saves his daughter by throwing himself atop her then leaves her behind, knowing that his life is a target. He swims to relieve stress, but that aspect isn’t fully explored.

The book, however, primarily concentrates on happenings in Brussels where Mahmoud Shammosh is giving a lecture on terrorism at a conference. He is approached in a roundabout way to meet someone, though who exactly he’ll be meeting is a mystery. When his companion is murdered before sharing anything of substance, Shammosh takes information from his wallet and flees.

Klara Wildeen used to date Shammosh before she left to go to school in London and he broke up with her as she boarded the plane. Her overworked and underappreciated life is thrown off kilter when Shammosh contacts her using a pet name from when they dated and asks for her help. She puts aside her life and becomes central to unraveling the mystery of what Shammosh’s old army buddy was trying to share with him before he was murdered.

George Loow is a lobbyist with few scruples, having already been tossed out of a law firm for his misdealings. When a new client has him sign an NDA and then start translating classified documents, he knows he’s in over his head. His firm simply wants him to keep the client happy but offers no direction, and George is lured further into the crimes of his client.

Through it all, a strong narrative is building and characters begin to come together in a race to stay alive – and determine what is on the computer Shammosh and Klara retrieve from a locker in a Metro terminal in Paris. The action is nonstop, and you never know which way the plot will twist next. There are several unconventional techniques used that make the events more compelling, as well.

Written by Michelle of Honest & Truly! who once thought she wanted to be a spy but has long since realized that is a life she’s glad she never led. See what she has done with her life instead on her blog Honest & Truly! and follow along with her on Twitter where she is also @HonestAndTruly.