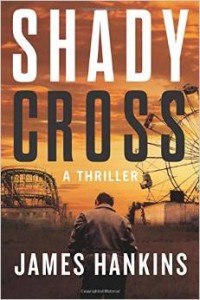 When you have a shady character who’s never caught a break in his life – the only two times he tried to live the straight and narrow, it blew up on him – who suddenly faces a moral choice, what direction will he turn? That’s the big question in Shady Cross by James Hankins.

Stokes is a small time crook who swindled a drunk businessman out of money before speeding off on his motorcycle to his home. Rounding a corner, he’s over the line and the car coming at him swerves to avoid him. Both crash on opposite sides of the highway in the forest. Stokes survives, but the other man doesn’t. Instead of calling 9-1-1 as most people would, Stokes spots a backpack in the car with money spilling from it and takes it.

That’s when his troubles really start. As he realizes that the money is intended for the ransom of the dead man’s daughter, Stokes wrestles with what to do with the $350,000 he now has. Deciding to flee – even after speaking to the kidnappers and hearing his “daughter” on the phone for the hourly check in with the dead man – Stokes gets on a bus, only to be stopped by the twin sons of the loan shark he owes $100,000. With some fast talking, he manages to avoid being worked over and pays the money he owes and accidentally $2,000 more, leaving him with a life-changing $248,000.

The phone call continues to haunt him, and when he accidentally reads the ransom note, detailing what the kidnappers will do to the six year old girl every time he doesn’t answer the phone, he finally decides he has to go back to where he’d tossed the phone initially and try to save the girl. Maybe.

Stokes blames his turn of conscience on a woman he hasn’t seen in 13 years – a girl he was in love with and had a daughter with – because he can’t blame the daughter he hasn’t seen since she was two years old. But it isn’t Jenny. There is something inside Stokes that wants to do the right thing, even as he fears for his life and simply wants to survive the night.

The entire novel covers a span of less than twenty-four hours of nonstop action, which means there is constantly something happening. Every plan Stokes develops is shot down in some way. No matter what he does, he simply can’t win, but he’s obsessed with somehow saving the little girl, Amanda. He can’t let the kidnappers know that he isn’t Paul, the dead man, but he doesn’t have the information he needs to pay the kidnappers the $350,000 ransom.

Full of suspense, you feel for Stokes, even though he is not a character you feel as though you should like. He shouldn’t be the hero of this story. He shouldn’t be sympathetic, yet he somehow is. Watching him fail again and again in his quest to save Amanda is heart-wrenching, yet you keep rooting for him to win out and somehow redeem himself from all the awful things he’s done in his life.

Written by Michelle of Honest & Truly! who certainly would have some plans if she lucked into $350,000. Her life is, sadly, far more mundane, but she shares the fun of it on her blog Honest & Truly! and follow along with her on Twitter where she is also @HonestAndTruly.

« Walking on Trampolines
The Swimmer »