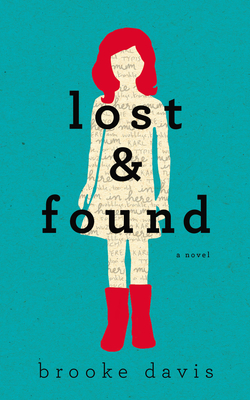 If any novel can make your heart break while simultaneously causing sudden bursts of laughter, it’s this debut from Brooke Davis. Lost & Found tells a strange and convoluted tale with a trio of characters unlike any combination I’ve ever read before.

Seven year old Millie, whose red-haired and red-booted likeness graces the cover, is still reeling from her father’s unexpected death when her mother abandons her among the racks of plus-sized women’s underwear in a department store. Of course, at seven, Millie cannot fully grasp the situation, and as a result, her innocent and hopeful perspective can be both sad and comical. In a strange turn of events, she crosses paths with two elderly locals– cantankerous Agatha, old in body, mind, and most definitely spirit; and introspective Karl, the still bereaved widower who is finding a new perspective on living now that he sees the end coming.

The plot is utterly impossible to abbreviate, other than to say that the three end up heading out together on a trip across Australia to reach Millie’s runaway mother. Even with very little action, these three would light up the pages with Davis’ delightful manner of developing their characters– odd, but insightful internal thoughts and bizarre conversations among each other and the various people they meet along the way. But when one wacky scenario after another gets added in, each with its own new set of oddball side characters, you’ve got a recipe for both an action-driven and a character-driven narrative. Both the plot and the characters keep readers on their toes, as either is likely to throw a curveball at any given turn.

Can such an entertaining novel really have a focus on death at its core? Yes, just as death and life, or dying and living, are inextricable, and the realization of such a fact might be the key to actual happiness. Agatha, Karl, and even young, tender Millie, must each come to this realization in their own way, whether it be by asserting power, letting down one’s guard, or simply revealing the new-found knowledge of the inevitability of death to everyone in sight.

I quite enjoyed this adventure, though I was admittedly not looking forward to the ending, convinced that there would be no outcome that I could find satisfying. After the surreal adventure the trio shares, I wasn’t keen on the jump back into reality that I suspected would be inevitable in calling this story to a close. The final surprise was just how deftly Davis wraps it up, in an ending that I couldn’t have predicted, even as I should have expected something a little nontraditional.

« The Super Chef Contest, Geronimo Stilton
The Girl on the Train »