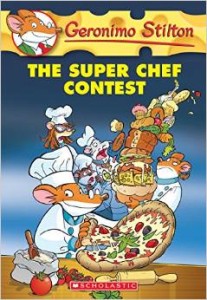 The wee ones have always been huge fans of Geronimo Stilton, the mouse who is the editor-in-chief at The Rodent’s Gazette, the most popular newspaper on Mouse Island, and a complete pushover when it comes to anyone in his family. The Super Chef Contest is the 58th book in the series, pseudonymously by Geronimo Stilton, and I’m constantly surprised by how each book explores a whole new avenue that exploits poor Geronimo while still coming up with a happy ending.

The books are easy to read, and every one of them is great for early readers. They make reading fun, especially with the varying fonts and colors that help display emotion throughout the book. There are illustrations throughout the book, as well, that help break is up for those kids who aren’t quite ready to dive into a dense chapter book quite yet. Each book is fast and fun, and I’m always surprised when I look at the page count and realize that yes, there really were over 125 pages in this book.

In this iteration, Geronimo’s obnoxious cousin Trapp has entered a contest to be named the Super Chef Contest, which determines the best chef on Mouse Island. This seven day competition is halfway across the island, but Trapp doesn’t care as he enlists Geronimo – through guilt – to become his assistant/taster/victim in the contest, with no concern that Geronimo a) might not want to and b) might have to actually show up at his job instead of taking off with no notice. It’s partly Geronimo’s giving in to the obvious machinations of others and ignoring his own desires and needs that as a parent rub me the wrong way within these books, but that message has always seemed to go right over the wee ones’ heads.

Once they arrive at the Super Chef Contest, Trapp disappears behind a huge screen to cook up his creations while Geronimo is left with just mountains of dishes to clean at the end of each night. As awful as the food is each time Geronimo is forced to taste it, Trapp somehow wows the judges in each round and moves forward. Figuring out how and why – and concluding the Super Chef Contest become the focus of this animated book.

I will fully admit that this is one of those kids’ books that as an adult I can’t enjoy reading. There are other series that the wee ones read at young ages that I would pick up and read with pleasure. The Geronimo Stilton books don’t fall into that category, as the writing style isn’t my favorite, but it is incredibly appealing to kids. They absolutely eat it up, and aside from Geronimo’s wishes being ignored, there aren’t any objectionable messages within the books. And for a reluctant reader – even my voracious readers – this is a perfect book to look at once they’re ready to start reading chapter books.

Written by Michelle of Honest & Truly! who may dream of entering a chef’s competition but never has and probably never will. See what she’s cooking up on her blog Honest & Truly! and follow along with her on Twitter where she is also @HonestAndTruly.