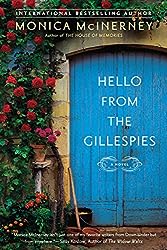 We receive dozens of Christmas cards every year, and I like to tape them to a piece of ribbon, then hang them in our living room. This year I even had a sort of theme to each ribbon. I love receiving cards from family we never see, old friends of my parents, and college friends, and of course with the cards often comes the Christmas letter – loved by some, dreaded by others. I confess to having written a letter myself once or twice, though it’s not something I’ve continued.

Angela Gillespie, on the other hand, has written a Christmas letter every year for the past 33 years, detailing life with her husband, Nick, on their sheep station on the edge of the Outback, the activities of their three grown daughters, and tales of Ig, their 11-year-old son. Only this year when Angela sits down to write her letter, she’s finding it hard to come up with many positive things to write about. She begins to type her real thoughts on her life – how Nick has pulled away from her, twin daughters Genevieve and Victoria both are having problems on their jobs due to poor decisions, middle daughter Lindy has moved home and won’t talk to Angela, and little Ig is just weird. Angela goes on and on spilling the beans about all of the bad parts of her life, never intending to send the letter out, but feeling cathartic letting it all hang out.

When Angela is called away from her computer due to an emergency, she leaves the letter up, intending to delete it. But when Nick comes across it, without reading it he decides to do her a favor by sending it out to all 100 recipients on their email list, resulting in their family and friends all knowing how Angela really feels. While the recipients enjoy her refreshing honesty, her immediate family are mortified by what she’s written, and Nick is initially angry but eventually realizes everything she’s written about him is true.

Monica McInerney comes from a large family and clearly enjoys writing about them. She does a wonderful job of capturing the dynamic of a close-knit family — the relationship between twins, what it’s like for a single child close in age to twins, and the experiences of a late-in-life child who’s 20 years younger than his siblings. In novels like this it can be hard to tell the some of the characters apart but each of the Gillespie children has a unique personality and a specific role in the family.

While Hello From the Gillespies is mostly Angela’s story, we get third-person glimpses of the other family members too, particularly Nick and Genevieve. Nick and Angela’s refusal to talk to each other is frustrating, but it’s also realistic as so many couples grow apart due to an inability to communicate. Nick has never confided in Angela about the farm’s finances and thinks she doesn’t care, when the opposite is true. Genevieve is sarcastic and opinionated but also fiercely loyal, especially to her twin sister, and Victoria has learned when to let her sister take the lead.

Hello From the Gillespies is a fun novel with wonderful dialog, an amazing setting in the Australian Outback, and a satisfying conclusion. I recommend it to those who enjoy families who argue like the best of them but always have each others backs.

« Sleuth on Skates
I Survived the Destruction of Pompeii, AD 79 »