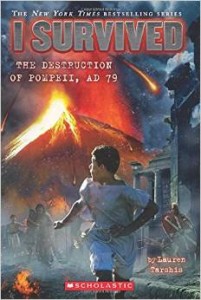 I Survived the Destruction of Pompeii, AD 79 is the latest edition in the I Survived series by Lauren Tarshis. Each of the books takes the reader into a historical disaster and shares many details of what happened and how people may have escaped. Tarshis does a huge amount of historical research to get as much detail into the situation as possible. It’s amazing how much you can get from a quick 112 page book.

In this iteration, two Roman slaves have been brought to Pompeii after their kind and learned master dies. Marcus and his father Tata are separated, with Marcus staying with his old master’s brutal nephew and Tata being sold to gladiators. Times are brutal for any not of the ruling class, and Tarshis captures this beautifully without it being to rough or graphic for young readers.

When Marcus coincidentally spots Tata being marched to the arena, he finally knows what happened to his father – since of course cruel masters don’t tell anyone where they’ve sold other slaves. At that moment, he decides to run away and somehow save his father since he knows his father will be forced to fight to the death in the arenas and will lose.

Not surprisingly, this happens the afternoon before Pompeii erupts. As Marcus and Tata flee Pompeii, they head for the mountains where the knowledge Tata gained serving his previous master is put to good use. He realizes that the mountain has something wrong and eventually that it is going to explode. Rather than simply flee, they return to Pompeii to warn it citizens.

The book includes so much more than simply the explosion of the volcano itself. There is plenty of information on social strata of the time, sporting events, and even hairstyles. Though the specific plot of the book may be unrealistic with slave father and son reuniting, being able to run away, find out that the mountain is going to erupt, and more, it is cute and fun and is able to impart a ton of knowledge without the reader fully realizing it.

As an adult, I may find the book a little simplistic, but my children adored it. It’s short enough for them to enjoy reading quickly while learning something new. They love that it’s nonstop action and adventure and the characters are fun. They’ve read other books in the I Survived series, and their reaction is always the same. They love discovering a personal story to a fascinating era, and that inevitably leads to them to want to explore and learn more.

Written by Michelle of Honest & Truly! who is grateful that she lives now and not in 79AD. See what her life is like in this era via her blog Honest & Truly! and follow along with her on Twitter where she is also @HonestAndTruly.

« Hello From the Gillespies
Emmanuel’s Dream: The True Story of Emmanuel Ofosu Yeboah »