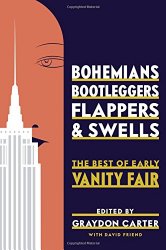 The Jazz Age. Just the words conjure up an image of bright lights, cocktail parties, young women in fringed flapper dresses, young men in suits and hats, and so much more. And the reigning magazine of the era was Vanity Fair. All the age’s luminaries submitted articles to it–everyone from P.G. Wodehouse (I’m a huge fan of his), A.A. Milne, Dorothy Parker, e.e. cummings, F. Scott Fitzgerald, Gertrude Stein, James Joyce, Thomas Mann, and many more.

In honor of the 100th anniversary of the magazine*, editor Graydon Carter has collected some of the best pieces published in Vanity Fair between 1913 and 1936, and it offers a fascinating look at an era that seems long gone but is in many ways like our own.

offers an interesting glimpse into the 20s. Some of the humor has not aged well and seems dated, but I was surprised at how many of the pieces could have been recent productions. Aldous Huxley, writing in the May 1925 issue, looks at what is meant by the word “modern” in ways that people still discuss and argue over. And the writing coming out of the Great Depression in the early 30s is relevant to banking issues and decisions made in our own times. “The Higher Education on the Screen” (Robert E Sherwood, February 1920) mocks how current youngsters are getting their education from movies rather than books, a complaint I’ve certainly heard in recent years.

While I enjoyed works by authors I knew, I also enjoyed random pieces by those I’d never heard of. “Hippocketiquette,” by Richard Connell in the April 1920 issue, offers an amusing look at the problems of Prohibition and ways to get around it. “A Western Reunion” by Geoffrey Kerr in the August 1926 issue is a humorous piece told entirely in telegrams. I also enjoyed the written sketches of Harpo Marx, Pablo Picasso and Cole Porter, to name a few.

isn’t the sort of book you sit down and read like a novel, but rather a reference book of sorts, a collection that you can dip into at will. I’ll admit I haven’t read it cover to cover, but have instead opened at random and looked for a title that caught my interest. This hasn’t been a problem, as interesting articles abound. It’s a rich collection with much for both the history buff and the lover of literature to enjoy.

« The Brothers’ Keepers
Things Half in Shadow – 5 star »