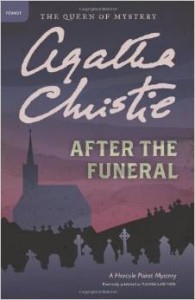 Growing up, I was a huge fan of Agatha Christie. I even signed up for the book club where I was sent one black hardcover book with gold lettering each month until I owned her entire collection – and I still have them. I read and reread all of them, but it’s been decades since I’d read any Agatha Christie mysteries. When After the Funeral was recently rereleased, of course I jumped on the chance to pick it up and delve into the miraculous workings of Hercule Poiroit’s brain once again.

Though After the Funeral is set in the early 20th century, it doesn’t feel so long ago. Because Agatha Christie does such a marvelous job of creating characters who are real and flawed and developing such a rich interaction amongst them, the setting around them is less important than their actions and motivations, which is the focus of her books.

Hercule Poirot was just as domineering and supercilious as I remembered him. His grey matter was as fascinatingly astute as ever, and just reading this one book has sent me back to search out more of my favorites from my collection in the basement. Agatha Christie crafts mysteries with a villain who is possible but not always the most likely or the one you anticipate it being. The twists and turns and insights into human psyche excuse the feeling that Agatha Christie is playing with you as you read the book.

Here, Hercule Poirot is called in to investigate the murder of Cora Lansquenet. At the reading of her brother’s will the day before, she uttered the shocking prhase, “He was murdered, wasn’t he?” about her brother who had ostensibly died a natural death. Though Cora was always seen as an odd bird by her family, her death the next day when an intruder broke into her house set off alarm bells with the family solicitor.

Hercule Poirot then puts himself to the test, not to prove that Cora’s brother was murdered but merely who murdered her, understanding that this would be sufficient to answer both questions. As he looks within the family to determine who could have wanted to murder Richard, let alone Cora, it’s quickly apparent that the reserved English family is nothing like what it seems. No one is truly the image they wish to present, and – as always – Hercule Poirot uncovers it all.

Although I know I’m being misdirected, I can’t help but continue reading. Agatha Christie is a master at creating a gripping tale, and I am never able to stop myself from reading “just another chapter” once I pick up one of her mysteries. After the Funeral has been released again, and whether you read it before or this is your first time delving into this book, it’s one you won’t soon put down.

Written by Michelle of Honest & Truly! who can’t believe it’s been this long since she’s read an Agatha Christie book. See what’s keeping her busy and away from Dame Agatha as she shares recipes and more on her blog Honest & Truly! and follow along with her on Twitter where she is also @HonestAndTruly.