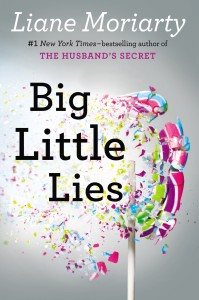 There are a few international women’s fiction writers who have exploded as of late here in the U.S. JoJo Moyes is the prime example, Lisa Jewell is a new favorite of mine and is successfully gaining traction, and now there’s no doubt that Australian Liane Moriarty is in that club as well, perhaps the queen with all the attention this book has gotten this year.

Earlier this year, I listened to the newly-published-on-audio Three Wishes. I liked it, and could see that she had that ability to balance plot, told with humor and suspense, with that “something more” bit of social commentary designed to make you think about the issues of our day while also grappling with the idea of right and wrong. Big Little Lies is a perfect example of this. The characters have their secrets, most of which are secreted away from the reader until Moriarty chooses to reveal them, and knowing them changes how we feel about them.

This book has been under $4 on Kindle for a while (as has Three Wishes), so I snatched it up to read on a long car trip last weekend. It was the perfect diversion. I loved each twist and turn these characters took. From the beginning of the book, the reader is privy to the fact that one of the school parents died at the school trivia night. Other parents are interviewed throughout the book, giving tidbits about the personality clashes and scandals that might have contributed. As I read, my mind was churning, trying to predict who might have died and whom had a part in it.

It sounds intense, but what really took this novel to the next level for me was the humor. Yes, the social commentary was right on, yes it was a gripping, suspenseful and surprising read, but it was so funny as well. I grew to love these characters (or hate them, where appropriate), but I couldn’t see how it could end in a way that would please me, and yet it did. Some of the cast of characters includes:

Rounding out the cast of Pirriwee Public are the high-powered working moms, a stay-at-home dad, Madeline’s ex-husband and his new-age wife, whose daughter is in her daughter’s class, the Blonde Bob PTA mothers, and the sweet Kindergarten teacher caught in the middle of it all.

Go read it. Download it now so you can sneak bits of it on your phone or your ereader as you’re riding from house to house over the holidays, or perhaps to give yourself a much-needed respite from cleaning or shopping or wrapping. Better yet, buy it for that reader on your list, perhaps the person who loves a good read but doesn’t give herself the time to enjoy it. Once she starts this one, she won’t be able to stop.