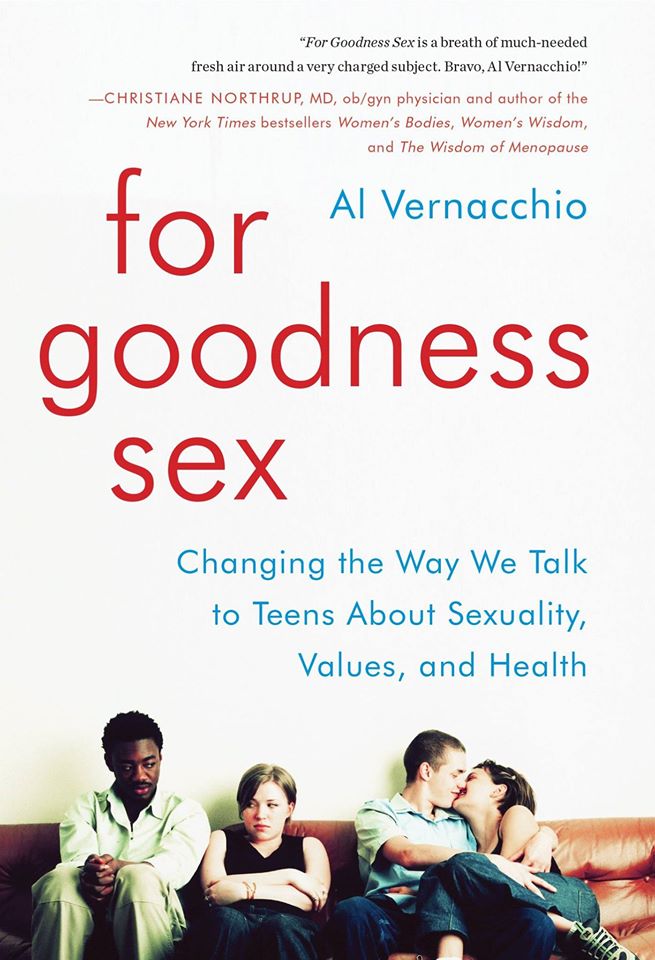 You know that image of the blundering, uncomfortable parent trying to have “the talk” with his or her teenager? There are countless reinforcements of that stereotype in our society, especially in pop culture, but I’ve always believed it didn’t have to be that way.

From a young age, I opted to use correct terminology when talking with my kids about their body parts. I would joke that we don’t tell our babies that they smell with their “sniffers,” but instead call it a nose, so why would I feel the need to come up with a cutesy name for my son’s penis or my daughter’s vulva? I’ve tried to retain that openness and candor with my kids as they’ve grown, and with my oldest now fourteen, the conversations have begun to change as he’s entered into a new stage of development. I cannot emphasize enough how helpful I’ve found the guidance in Al Vernacchio’s book For Goodness Sex: Changing the Way We Talk to Teens About Sexuality, Values, and Health.

Vernacchio talks the talk, but also walks the walk as a high school sexuality educator. So just think, he’s talking about these topics with a room full of teenagers! To do that, you have to be comfortable and honest, and Vernacchio comes across as both in his tone in this book. While some parents reading even just this review might already be a little uncomfortable, be assured that the book conveys respect to both parents and teenagers, encouraging both parties to be thoughtful and engaged in meaningful discussions with each other.

In many ways, the guidance in this book seeks to change the ways in which we look at sexuality and relationship behaviors. One of my very favorite segments encourages the dismissal of the “baseball model” in thinking about a couple’s sexual activity. When one scrutinizes that model, in which each base equates with a different “stage” of activity, many flaws can be found, including posing one person in the couple as the aggressor (usually the male) while the other plays the role of the defender (usually the female). Though there are several other concerns this model can bring up, even just examining this one issue raises some red flags. Vernacchio’s alternate model emphasizes a mutual agreement on activity between partners and doesn’t lay out a one-size-fits all, linear progression as the “correct” way to engage in sexual activity. What he offers as an alternate way of framing a couple’s activity together is funny and makes the conversation accessible. Brilliance! Turns out, I’m not the only one who was impressed by his new perspective. The good folks at TED gave him his own TED talk on this very subject. It’s definitely worth nine minutes of your time.

I truly appreciated the balance struck in this book among emphasizing the need for education and information, the development of personal and familial values, and the presentation of the world in which adolescents are coming of age today. For Goodness Sex is the most forthright, thought-provoking, and useful parenting book I’ve read in as long as I can remember.

« Prayer: Experiencing Awe and Intimacy with God by Tim Keller
David Baldacci on his switch from adult legal thrillers to fantasy for kids #ReadBaldacci »