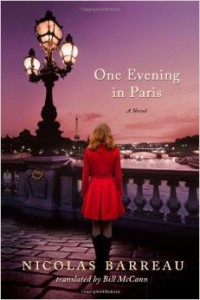 Alain Bonnard is happy with his life running the Cinema Paradis that his uncle Bernard gave him when it was time to retire. His theater serves no popcorn and focuses on the theater aspect of movies in the old-fashioned movie house tradition in One Evening in Paris by Nicolas Barreau. One of his favorite parts is his Wednesday night feature of Les Amours au Paradis of classic love stories, especially the woman in the red coat who comes each week and always sits in row 17.

The night he gets up the courage to finally speak to her – and ask her out – changes his life forever. Their date is one of the ages with all the romance of every sappy chick flick you’ve ever seen. They make a date for the following Wednesday, but she never shows, and Alain is obsessed with tracking her down and finding out what happened to her, with the sometimes reluctant help of his friend Robert who urges Alain to just forget his Melanie.

At the same time, Solene Avril, a Hollywood movie star with a French background has brought her producer Allan Wood to Cinema Paradis, begging him to film scenes in it for her latest movie. Alain is swept into agreeing to film and becomes friends with the Allan and Solene, leading to his portrayal in tabloids and his movie house being given attention by the French press which means he is selling out for the first time ever.

As Alain attempts to track down Melanie, the potential coincidences mount. Needless to say, this isn’t the most realistic story, but it is beautiful in its own way of lost loves and misunderstandings and a quintessentially French way of communicating. There is less action in this book and more talking and reiterating of circumstances than most American writers provide, but it remains enjoyable and has a somewhat nostalgic feel.

You can’t help but feel for Alain as he tries and comes so close to regaining his love throughout the book. There are bits of foreshadowing as Alain reflects on how he could have so easily found Melanie had he done things differently in so many places.

This wasn’t a book I devoured in one sitting, but it was one I kept coming back to, wanting to read just a little more several times each day. It was an easy read with one exception I found interesting. I speak French (or did) and most books give only the most cursory phrases in French and leave the rest in English – c’est vrai!

One Evening in Paris,  however, broke with that tradition in using French phrases common in France but less well known to those living in the States. While many I knew or could translate, there were a few I actually looked up because there wasn’t a ready translation or context available. I was curious enough to see exactly what Barreau was trying to say, but it did interrupt the flow of reading more than  I imagine he intended.

Written by Michelle of Honest & Truly! who misses living in Belgium and plans to retire to Italy one day. Her life is no Parisian dream, however. You can see the gritty reality on her blog Honest & Truly! and follow along with her on Twitter where she is also @HonestAndTruly.