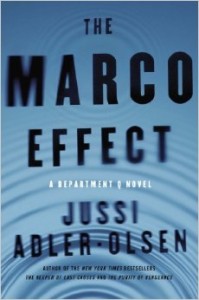 The Marco Effect by Jussi Adler-Olsen is not my first foray into Department Q. I also read (and reviewed) The Absent One, which I absolutely adored. Once again, Detective Carl Morck is making no friends in the Copenhagen police force, but that isn’t his goal. He is focused solely on solving the cold cases he decides to take on and has no patience for anyone who isn’t a part of his program.

This time around, he quickly determines that an assigned cold case was not investigated properly and the conclusions entirely wrong, with the help of his assistant Rose (who he unilaterally begins to make a field officer) and Assad, who is still recovering from an attack in the previous book. However, Gordon, an intern and apparent lackey of Morck’s nemisis within the department who is the new acting head, is assigned to Department Q as a watchdog and proceeds to frustrate Carl even further as he unwillingly investigates a missing person’s case at the behest of Rose, one that wasn’t even a part of their cold case files.

William Stark is a civil servant who went missing four years previous upon his unexpected early return from Cameroon where he was looking into a government aid project. No one ever heard from him, and his step daughter and partner are still looking for him, unwilling to admit that he would have voluntarily disappeared on them.

At the same time, Marco, a fifteen year old pickpocket finally had the straw that broke the camel’s back within his clan and has run away. No one leaves Zola, and when he realizes that his nephew may have stumbled upon the body of a man he had killed as part of a contract and overheard Zola and his brother – Marco’s father – discussing the murder, he pulls out all the stops in an attempt to track him down and kill him, as opposed to his previous plan to simply maim him to increase the clan’s begging proficiency and keep Marco dependent upon them.

Having lived his entire life on the streets, Marco has no love of the police and has put the body he discovered out of his mind until he discovers the missing person’s poster put up by Stark’s step daughter and can no longer live with knowing the fate of the man. As he wrestles with what to do – whether to contact the step daughter, turn Zola in to the police, or something else entirely – he is finally spotted by his clan and needs to evade their capture attempts on top of everything else.

The book started out somewhat difficult to follow, as it jumped from time frame to time frame and perspective to perspective without tying them together well at the beginning, but once Carl Morck came into the narrative and began to tie the various pieces together, it became much more clear – and the reasoning behind the jumps in time and place made much more sense, as well.

As much as I would hate to work anywhere near Carl Morck, he is a character you root for throughout the book. His assistants as the perfect foil for him and keep him from being too hard edged and ensure he never crosses the line into cruel. The levity of their interactions, as well as Carl’s forays into dating, keep the book from being too dark. They are a great contrast, although in this book I felt like the bad guys were too bad and lacked that kernel of humanity that makes them a trace more interesting.

Not surprisingly, once I was immersed into the world of Department Q, I didn’t want to surface and devoured the book in a matter of a little more than a day. It was an enjoyable read, and it reminded me that I haven’t – yet – read all the Department Q novels and that I need to get caught up on the series. I have read two of the books so far, out of five, and they all stand alone. Though there are references to other cases and Morck’s personal life is frequently brought into the book, it is not necessary to have read them to follow each individual book.

Written by Michelle of Honest & Truly! who is more grateful than ever for her stable home life and that of her children. See how she keep her family together as she shares her blog Honest & Truly! and follow along with her on Twitter where she is also @HonestAndTruly.

« Cooking with Frank’s RedHot Cayenne Pepper Sauce
Not My Father’s Son: A Memoir »