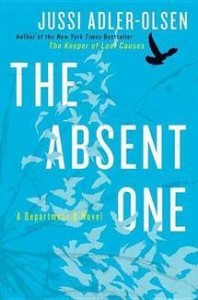 Carl Morck is not a happy detective in Copenhagen. Though he solved his first cold case as the only detective part of Department Q, a newly formed agency required by the Danish government and a handy place to stick the detective no one wants to work with, he still struggles both in his home life and work after the death of one of his partners and severe injury to another that led to his appointment in Department Q to begin with. In The Absent One by Jussi Adler-Olsen, Morck takes on another cold case involving the murders of a brother and sister twenty years previously.

Morck selects this case when the case, even though a murderer has been convicted and is serving time. The file mysteriously appeared after all the case files disappeared and Assad, Morck’s assistant is able to find just this one within the pile of other folders. After reading through the case file, Morck is intrigued. The man who confessed didn’t do so until 9 years after the murders. He was the only one in his gang of friends who didn’t come from a wealthy background yet now is rolling in money according the the most recent annual report on him.

And so he bites, though regretfully so, knowing that someone must be manipulating him within the Danish police force, and he wants to understand that before he digs too deep.

The actual case is ugly. Two siblings were brutally murdered in a seemingly random act by a gang of wealthy and spoiled boarding school kids, though there was no evidence to tie the teens to the murder. The investigation seems to have been done sloppily, as many questions and leads weren’t followed down, making Morck’s job that much more difficult.

The book flashes between the “gang” as they are today- Kimmie a potentially mentally ill woman with over a million kroner hiding in Copenhagen as a bag lady, as well as Ditlev, Torsten, Ulrik, and Floren who are flourishing as titans of industry within the rich and powerful in Denmark – and in 1986 when the murders were committed and they were a group of spoiled rich kids playing with drugs and turned on by violence, all while following Morck’s investigation.

The book is fascinating, and I didn’t want to put it down until I – along with Morck – unraveled all the clues and figured out how each thread tied to another. Adler-Olsen does an amazing job creating the details of the plot that tie together so perfectly yet aren’t obvious until you stumble upon them. His characters are flawed, and perfectly so in the case of Morck. You even develop a sense of sympathy for Kimmie, though the other men in the gang remain villains through to the end.

Though this was the second book in the series, you don’t have to have read the first book – The Keeper of Lost Causes – to follow and appreciate The Absent One. There are a few references to Morck having solved a high profile cold case, but that is about it. That said, I enjoyed The Absent One so much that I immediately picked up the first book in the Department Q series and read it, as well.

Written by Michelle who is so grateful that her friends in high school weren’t interested in finding trouble. See how she aims to keep her own children out of trouble as she shares on her blog Honest & Truly! or follow along with her on Twitter where she is also @HonestAndTruly.