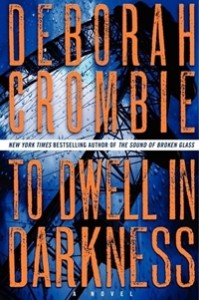 A concert’s being held in the vast echoing space of London’s St. Pancras’ Station, and a crowd has gathered to watch the up-and-coming musicians. A group of protesters unfurl their banners and get out their placards, when suddenly there’s an explosion. Later, all claim it was supposed to be a smoke bomb, but instead it’s a white phosphorous grenade, deadly beyond simple burns to the point of organ damage to all who come in contact with it. Meanwhile, the one who set it off is burned to a cinder.

DI Duncan Kincaid is assigned to cover the case. Oddly enough he knows a policewoman who was at the scene–she’s part of his wife Gemma’s team, and her boyfriend was one of the musicians. Piecing together her eyewitness account with the stories of the protesters, he begins to make progress. He was recently demoted but doesn’t know why, and is working with a new team in a new office and worrying about what happened to his old boss, who left on a mysterious “family business” errand and hasn’t returned. Gemma’s also a DI and following her own case, that of a raped and murdered 12 year old. She’s sure she’s got the killer but is having a hard time coming up with hard evidence. She and Kincaid mostly interact in their home, where the children have rescued a cat and 4 tiny kittens and everybody wants to keep them all.

If all this sounds a bit convoluted, it is. To Dwell in Darkness

is the 16th book of a series following the married detective couple Kincaid and James, and their children, foster child, and friends. Although I enjoyed the book, I did feel a bit lost sometimes, and occasionally had a hard time keeping all the characters straight. I never did figure out who was bringing the beef stroganoff and why, and it took me a while to sort out which names went with the children and which with the dogs. Sigh…more books to read, which is never a bad thing. I don’t mind series being actual series, and I sometimes get annoyed when authors add it too much background to make things clear, but I wouldn’t have minded a brief synopsis.

Kincaid is an appealing character–straight forward, hard working, fundamentally decent. He is obviously still a little uncomfortable with his new team and pulls in favors from former colleagues, and slowly but surely he begins to unravel a plot. He’s tracking down a former member of the protest group, untangling some hidden connections, and steadily making progress, when he realizes how vulnerable his own family is, and those of other policemen.

To Dwell in Darkness is a satisfying read, with likeable characters and a plot that’s twisted enough to keep the reader guessing. I will definitely be looking for Deborah Crombie’s back list as well as any future books. (And I know there’s one coming, since this one ends on a bit of a cliff-hanger)