I don’t know how I’ve missed Jeffrey Brown’s previous Star Wars books, Darth Vader and Son and Vader’s Little Princess, but when I saw Jedi Academy in the Scholastic catalog, I knew it was something my 6th grade Star Wars fanatic would like.

Roan can’t wait to attend Pilot Academy Middle School and become a pilot like his older brother, father, and grandfather, and is crushed when he doesn’t get in. Having accepted his fate at Tatooine Agriculture Academy, he’s surprised to receive acceptance to Jedi Academy, especially since he’s a little old to begin Jedi training. But it’s better than Plant School, so off he goes.

Roan doesn’t know what to expect but makes friends quickly. He also deals with bullies, his inability to use the force, and his feelings for a girl, and before long realizes he really does want to be a Jedi after all. 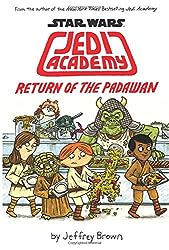 In Return of the Padawan, Roan can’t wait to go back to Jedi Academy for his second year. He’s mastered the use of the force and finally can understand Master Yoda, and he’s ready for Starfighter Flight Training. There’s a new chef at the school, and a class pet that the students need to care for. Plus this year the students have access to Holobook, a social media site where the mean kids take advantage of the written word.

Flight training is harder than Roan thought it would be, and when his best friend and the girl he likes stop speaking to him, he starts hanging with the bullies. But he’s determined to get his friends back and win over a teacher who has it in for him.

The Jedi Academy books are a mix of graphic novel and journal entries, plus copies of the school paper including a comic written by Roan about an Ewok pilot, homework assignments, letters from home, school posters, Roan’s notes on things the teachers said, and other scrapbook-like pages.

Kids from grades 4 and up will relate to Roan and his classmates — maybe not their classes but definitely their struggles to fit in and get good grades without being the teacher’s pet. Roan tries to talk to his friends about why they’re made at him but they often won’t talk to him, which is a realistic situation I recall not very fondly from my own middle school years.

There are a lot of characters to keep track of and the small images made it hard to distinguish them at times, but that’s probably just my old age talking and I don’t think kids will have any problems. I highly recommend these books to kids ages 9 and up, especially those who love Star Wars.