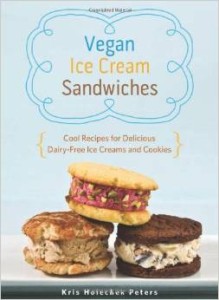 My daughter has a dairy allergy, so it’s a good thing I enjoy cooking and baking from scratch. I’m always on the lookout for new and fun ways to recreate dishes for her, and ice cream is one of our favorites. Until now, I had never made ice cream sandwiches, however. When Vegan Ice Cream Sandwiches: Cool Recipes for Delicious Dairy-Free Ice Creams and Cookies by Kris Holechek Peters arrived, my daughter flipped and immediately commandeered the cookbook.

She was over the moon at the variety of offerings on tap. The full color pictures on what felt like every page intrigued her, and she couldn’t wait to start making them. It is summer, after all, and what’s better on a hot day than some ice cream? I’ll admit that some of the flavors had me intrigued, as well. Cake batter ice cream? Earl Grey ice cream? Orange zest shortbread? There were so many amazing options in the book that I didn’t know where to start. Fortunately, Little Miss did.

I appreciated that the ingredients used were very approachable. Even my mom had them all in her pantry, with the exception of arrowroot starch for the recipe Little Miss wanted to make. Some recipes called for soy milk, while others asked for coconut, hemp, or other milk alternatives, which makes the book that much more accessible to those who have a variety of food intolerances or dislikes. I made a few recipes from this book, and the coconut milk ice creams by far turned out the best and closest to “real” ice cream – my guess at least partly because of the higher fat content (but it’s healthy fat!) in coconut milk.

Because this is a vegan cookbook, there were no eggs in either the cookies or ice cream. As successful as my ice creams were – including when I riffed and turned a vanilla bean ice cream into a cherry vanilla ice cream – my cookie attempt wasn’t quite as successful. Egg has so many important attributes in baking, and the substitutes weren’t quite the same. My cookie tasted great, and Little Miss and my family loved the vegan ice cream sandwiches we made, but I was somewhat disappointed that they turned out more crispy than I had hoped, which meant they broke as you tried to eat them.

Overall, this book has been a huge hit in my house, and between the variety of recipes with ingredients we know and use and the inspiration it’s giving me to try out new flavors, it’s one of the few cookbooks that has made its way onto my cookbook shelf to be pulled out regularly. We already have our next set of recipes earmarked and can’t wait to see how they turn out.

Written by Michelle who apparently has an ice cream problem, whether vegan ice cream or not. She’s lost count of the number of posts about ice cream on her own blog Honest & Truly! where you can check out her recipes or follow along with her on Twitter where she is also @HonestAndTruly.

« Kindergarten, Planes, and Sea Bears from Chronicle Books
The Time of the Fireflies #MMGM »