I listened to Rainbow Rowell’s first book, “Attachments,” a few years ago after reading Dawn’s review, and really liked it. 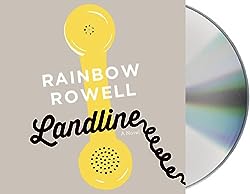 Then she suddenly exploded all over the YA world with Eleanor & Park (which I tore through and loved) and Fangirl, which I have not yet read but really want to (read Jennifer’s review of Fangirl here.). So when her second book for adults, landed on my doorstep, it didn’t take much convincing for me to give it a listen.

Georgie McCool finally has her big chance to get her own TV show. She and her writing partner, Seth, friends since college, have had an idea for a show for almost 20 years. The only problem is their big meeting is 2 days after Christmas, and she’s supposed to leave with her husband, Neal, and their 2 daughters to visit his mother in Omaha. When Georgie tells Neal she can’t go because she and Seth need to spend the next 10 days writing scripts, she doesn’t expect him to go without her.

Georgie wonders if her marriage is falling apart – she and Neal love each other, but is it enough? Not wanting to be alone she goes to her mom’s house, where her attempts to reach Neal by cell are fruitless. He never brings his cell with him when he leaves his mom’s house, so she gets to talk to her girls and his mom but never him, and he doesn’t respond to texts. Georgie’s own cell needs a new battery so only works when plugged in and no one at her mom’s has an iPhone charger. So she digs her old yellow rotary phone out of her childhood closet and calls Neal by landline.

What Georgie doesn’t initially realize is she’s talking to Neal back in 1998, during the week they broke up in college. She’s begins to figure out what’s going on when she talks to Neal’s father, who died the previous year, and Neal references his drive straight through to Nebraska. Georgie knows she and Neal never spoke during that week, so needs to figure out why this is happening — is she supposed to change the past to save her marriage?

Landline is full of pop culture references to TV shows, music, and movies, and as a professed TV addict myself, I loved the mentions of shows I myself have loved. Georgie’s family is sitcom-wacky – his mom is on her third marriage to a man only a few years older than Georgie, and they have 2 show pugs, one of which is very pregnant, who they treat like children. Georgie’s 18 year old sister, Heather, loves having Georgie home, and when she picks up the yellow phone and talks to 1998 Neal, thinks Georgie’s having an affair. Their relationship is sweet and real and while Heather is sarcastic, she’s not rude and disrespectful like teens are often written.

I’ve heard a character from Fangirl makes a cameo in this book, so if you’ve read the earlier book, keep an eye out.

I highly enjoyed Landline and recommend it to anyone who remembers the days of spending hours on the phone with someone, whether they were close by or far away, and especially those who were in college in the 90s.

Notes on the audiobook: One thing I love about audio books is the author interviews at the end, and the interview with Rainbow Rowell was fun and informative. She discusses writing a YA book vs. an adult book, the inspiration for the story in Landline, and her own love of audio books, which are the perfect medium for a dialog-heavy novel.

« Just Call My Name
The Hundred-Foot Journey {Books on Screen} »