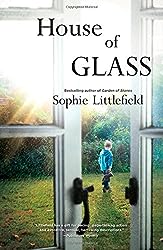 Last year, I reviewed Sophie Littlefield’s historical fiction debut, Garden of Stones (linked to my review). I wasn’t aware her second women’s fiction novel was being published until I received an ARC in the mail, but as often happens with unsolicited books, it was set aside in favor of review books with deadlines. During a lull between those review books, I decided to pick up House of Glass, and was unable to put it down until I finished it.

Jen Glass has just returned from burying the father she hasn’t seen in 3 decades, a task she sees as just something else to cross off her to-do list. Her husband Ted has not made much progress on their master suite renovation or found a job after being laid off, her 15 year old daughter Livvy is distant and moody, and 5 year old Teddy won’t speak to anyone outside the immediate family. When she opens her bedroom door and finds her daughter at gunpoint and her son in a stranger’s arms, she realizes her life will never be the same.

The Glasses are shoved into the basement while their kidnappers have the run of the house. Jen and Ted try to figure out what they want and how they got into this mess; Jen wonders if it’s related to her past, and Ted is hiding something from Jen, afraid to come clean. Livvy has her own reasons to believe the men in the house are there because of a bully at school.

When Dan, the older of the two men, takes Jen to the bank to empty their money market account, the money she’s carefully squirreled away is almost all gone. Ted’s reason for the withdrawal explains some, but not all, of his absences that have caused Jen to wonder where he’s been spending his time. In the meantime, Livvy’s attempt to get Teddy out of the house have gone desperately wrong, and Ryan, the younger of the men, has set his sights on Livvy, determined to get her alone.

“House of Glass” is fast-paced and full of suspense, and while it is predictable at times, reminiscent of a Lifetime drama, the secrets that both Jen and Ted are hiding are not what I expected. Jen taps into reserves of strength she hadn’t touched in years after recalling an event she has blocked out with help from her sister, Tanya. And Livvy is far from a helpless, sniveling, teenage girl. We only get a glimpse of Ted’s side of things but it’s enough to fill in the holes, even if only for the reader.

“Garden of Stones” and “House of Glass” are very different premises, but both are ultimately about a mother’s love and what one’s able to do to save her family. I look forward to Littlefield’s next novel, about two mothers who come together to find their missing songs, due out in October, and recommend “House of Glass” in the meantime.

« The Extravagant Fool
Elizabeth is Missing »