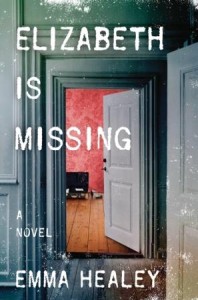 Elizabeth is missing. Maud is sure of it. She calls Elizabeth’s house and the phone rings and rings but no one picks up. She’s walked over to her friend’s house as well and knocked and even gone round peering in windows, to no avail. She keeps telling her daughter, Helen, and her carer, Carla, about it. She even goes to the police, who seem more amused than alarmed. Maud is frantic with worry, but can’t make anyone listen to her.

The problem is, Maud is 82 and struggling with dementia. She writes a grocery list and walks down the shop, but once there she can’t remember what the words “eggs” “milk” or “chocolate” actually mean, so she just buys tinned peach slices, as always, even though Helen fusses. She sees a bus coming so she gets on it, and they let her ride even though she can’t find her pass.

Elizabeth may or may not be missing, but Maud also lives in the past, remembering the time after the war when her sister, Sukey, did disappear. Their mother died without ever finding out what had happened to her. Maud struggles with keeping the two time periods separate, certain she’s going to see their old lodger or perhaps Sukey’s husband walk in to the room. Maud is getting worse, losing more of her mind, but she’s clear on the distant past–it’s just that they never did find out where Sukey went. Suspicion rests on her husband, Frank, or on their lodger, Douglas, but maybe Sukey herself just left–women did do that after the war, just walk out. Maud hopes and hopes that this is what happened, that her elegant and loving sister is somewhere else living in happiness. The 2 story lines weave in and out, the modern and the decades-old mysteries, and combine into a coherent whole where the truth is revealed bit by bit in a very satisfying way.

is a very unusual book but I absolutely loved it. It’s mostly told from Maud’s point of view, yet through it we clearly see how Helen feels, or how Helen’s daughter Katy is dealing with things. It’s sad but also unintentionally hilarious (that is, Maud is often unintentionally hilarious–I’m sure the author was intentional), to see Maud’s view of things, to watch Helen deal with the endless repetition, to see Katy or the policeman’s reaction to Maud’s earnest fumblings.

The book rings true to life, and is a clear picture of what it’s like to suffer from dementia. But while it in many ways a look at memory and what it means to lose it, it is also a lovely look at the importance of relationships in life. Helen’s commitment to her mother’s care, Maud’s lasting concern over Elizabeth’s whereabouts and her continuing care and love for her sister, all combine to present a very clear slice of the everyday loves that get us through and that give life meaning even when meaning is being lost. Of course in some ways it is a sad story but honestly it doesn’t leave you feeling that way, only grateful that you knew these people for a little while.

is a gorgeous book and I’m giving it our highest rating, 5 stars. It’s the kind of book that stays with you, leaving you mulling it over and thinking of implications. If you’ve dealt with an aging parent or grandparent, this book will make you miss them fiercely, but even if you haven’t, I think most will enjoy this inside look at the issues of dementia. Highly, highly recommended.

« House of Glass
The Forgotten Seamstress »