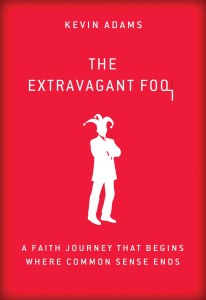 I have learned by experience what it means to trust God even when it hurts. It seems like we only truly tune our ear to God’s voice during difficult inexplicable situations. Kevin Adams knows this. He went from a financial success to one dealing with the failure of his business and the failure of his role of provider to his family. It was only in realizing that he could not provide for his family that he learned to truly trust God as The Provider.

That last sentence is a good enough sound bite for the book. It’s accurate and Adams does share how he walked with God during 4 years of financial uncertainty. But he doesn’t share enough. This is a decent book which could have been so much better. It is full of vague allusions to not knowing where the next month’s house payment or utility bill or groceries would come from, but no in-depth exploration of how that affected him. There are of course vague references to a depression and sleeping a lot during the day and frustrated efforts, but in a book that is supposed to be a journey to a new way of life and thinking, we — the readers — should be let in on the difficult process of letting go of the old way.

One of the biggest omissions in my opinion, and what would have made this feel like the real story of a real family as opposed to some lesson doled out in sound bites is how this affected his family. He does get close to transparency when he shares about the time that his wife almost gave up on him and his vision from God. But throughout this 4 years — 4 years of not knowing where groceries were coming from — there is not one word about something that his tween daughters wanted that he could not give them. These girls went from living in a large home in an affluent area to living in an “ugly plaid shirt two sizes too small” as his wife called it. Certainly they complained. Certainly his heart wrenched as a father unable to provide the extras his children had come to expect. Following God in this way is always hard, but when it affects our children, it’s even harder, and yet in reading Adams’ book, one assumes that other than a little complaining from his wife and a couple of months without A/C in a sweltering Florida climate, there was no pain.

We are told of the real estate bought and sold in the quest to move to bigger and better and learn of the debt that holds him captive to the now-undervalued properties. I suppose the regret is implied, but who better to drive the point home of the sin of living in debt above one’s means?

He shares the success of his business and the exponential growth in the years right before its collapse, but we never know what that business was (some sort of indefinable consulting, but please — try to define it).

When I read a Christian nonfiction book, I usually use post it flags to mark passages that spoke to me. I flagged a lot of paragraphs and sentences in The Extravagant Fool, so it did speak to me. It encouraged me and challenged me at times, which is why I’m not panning this book (though it might seem so). I was just left wanting, because an opportunity to really share and encourage and truly let go of the pride of caring what others thought seems to be lost.

Another positive is that it is an easy book to read. Many times when I’m reading Christian nonfiction, I get about half way through a book and struggle to finish the last half, because it reads as more of the same. I wanted to find out how Adams’ story ended, so I kept reading, and because of his simple and conversational writing style, it was easy to do so.

« One Plus One by JoJo Moyes, a 5-Star Read
House of Glass »