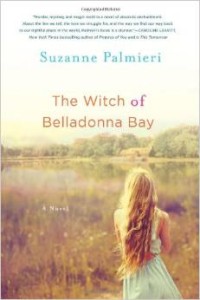 Bronwyn hasn’t been home to Magnolia Creek, Alabama in 14 years, not since her mom was buried. She ran from her drunk father, younger brother she’d promised to protect, her best friend, and more – all at the age of 17. She established a new life and is happy as a freelance photographer (and street fortune teller) in a seven year relationship with Ben. When the phone rings, and it’s her dad begging her to come home after her brother Paddy was arrested for murder in The Witch of Belladonna Bay  by Suzanne Palmieri, she comes because the 11 year old niece she’s never met needs her.

Bitsywyn, as she was known throughout her life in Magnolia Creek, knows in her heart of hearts that her brother couldn’t hurt a fly, and he’d definitely never murder her best friend Lottie. As she heads back home, she leaves Ben behind, not willing to expose him to the craziness that is her family. The second she’s back, she can feel herself slipping into her old life, Bronwyn fading away. Her sarcasm and pride come to the forefront once again, things she thought she’d outgrown.

She also falls in love with Byrd, the niece she regrets never having met. Byrd has run wild in this family with no moral compass. She doesn’t attend school, she’s given bourbon in her lemonade, and she’s allowed to puff on Jackson’s cigar – and no, no one calls Jackson “Daddy” or “Grandpa” as the drunk, rich, mayor of Magnolia Creek is nothing but Jackson.

The spellbinding (pun intended) novel is told from the points of view of Wyn and Byrd, as well as periodically from Naomi, Wyn’s opium addicted mother who overdosed but still stays on as a ghost. In the Green family (Naomi’s maiden name), having ghosts about isn’t a surprise. The women are witches, all blessed – or cursed – with powers to a greater or lesser degree. Naomi had great powers and was driven from her home in the north by those who feared her, and she kept running. Wyn’s powers are far less, but she never felt quite right either. Byrd’s, on the other hand, are incredibly strong, as Paddy’s wife Stella also came from a magical family.

The magic isn’t the central part of the tale. It’s about finding who killed Lottie and rescuing Paddy from his conviction, completed in the 6 months it took Jackson to build up the courage to call Wyn. Lottie’s son Jamie, Byrd’s best friend, is also missing, and if his body is found, the likelihood is that Paddy will face the electric chair.

At the same time, there is a need to find closure for all the Whalen family, from Wyn and Naomi to Byrd and Jackson, as well as Lottie’s brother Grant who was always with Wyn, Lottie, and Paddy. Finding out that the truths you believed years ago aren’t necessarily the way things really were is always eye opening, and it’s heartening to see the characters grow and discover things they didn’t see before.

It’s all about not seeing the forest for the trees, and The Witch of Belladonna Bay is beautifully written to draw you into the mystery and fall in love with the characters. They are flawed, incredibly so in many cases, yet they are still endearing. More than once, Wyn comments that her family has no moral compass, and she’s right. I couldn’t imagine living the way they do, yet with their hearts in the right place, I couldn’t help rooting them on.

This is Suzanne Palmieri’s fourth novel (two written as Suzanne Hayes), and I’m hooked. I adored her writing style, and I will definitely be searching out The Witch of Little Italy, as well as her two other novels.

Written by Michelle who swears she just might have a little magic in her, as she uncannily knows who will call seconds before her phone rings. See what else makes her special as she shares on her blog Honest & Truly! and follow along with her on Twitter where she is also @HonestAndTruly.

« Jack of Spies
A Summer of Agatha Christie: Read-along »