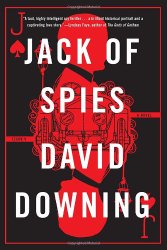 It’s 1913 and Jack McColl, a luxury car salesman from Scotland who nevertheless attended Oxford and has a knack for picking up languages, is doing a bit of freelance work for the fledgling British secret agency and hoping to pick up more. The idea of spying is somewhat new in the world, but Jack shows a knack for this kind of work and his job, which involves traveling the world attempting to sell the “Maia” to a world where many people are still using horses, provides him with a good cover.

plays with the idea of identities, and it’s fun to watch Jack develop his role. The novel opens in the German concession of Tsingtao, China, where Jack is trying to find out about arms shipments and barely escapes with his life. He moves on to Shanghai, where he meets up with his younger brother and also runs into a young Irish-American journalist, Caitlin Hanley, who seemed a bit anachronistic to me, with the ease in which she came to Jack’s bed.

Britain is not only concerned with what’s happening in Germany. The rise of nationalism in Ireland is a hot issue, and Jack realizes Caitlin’s family may be involved in plots against the British government. After he survives a knife attack in Shanghai, he travels by boat across the Pacific and later by train across the continental US. Coincidentally, Caitlin, an avid feminist before the word was invented, passionate about the causes of the poor and social justice, travels with him. Jack spies on a priest, picks locks, narrowly avoids death on several occasions, and manages to find plenty of time to spend with Caitlin, wondering about the future of their relationship.

By the end of the book, the rumours and thunders have reached a crescendo and war has broken out. Jack is back in London, dealing with the Irish situation and hoping he doesn’t have to choose between his job and his love, while recognizing that he may be able to keep neither.

This novel is well-researched and interesting, although it has its slower moments. This was my first David Downing novel and it begins a new series, but he’s written 6 novels in the “Station” series set in Europe in WW2. While I found this book a bit meandering, I enjoyed it enough that I’m looking forward to the rest of the series, and will look for Downing’s previous books.